Brandon Started Writing Sixth of the Dusk Sequel in Germany 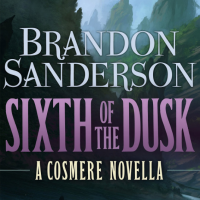 Today Brandon revealed on Twitter why the progress on Stormlight 4 didn't go up much during his trip to Germany. He didn't have much time to write, but he said he got through two scenes of a non-Stormlight cosmere novella. We were going to go through a long list of things it could be, but then he revealed on Reddit it was a Sixth of the Dusk sequel.

What will a sequel to that novella be? Well, Brandon has said before during the Oathbringer tour that he outlined the novella, and it involves Sixth exploring Shadesmar. That gets me pretty excited, especially since Sixth of the Dusk was already so late in the cosmere timeline.

Note that he only got two scenes in, which obviously isn't very far. Brandon said he will pick it back up on the flight to Spain in July, and if he doesn't finish it, he has a long flight in October to visit France and Israel. Why didn't Brandon work on Stormlight on the flight? He says it's hard to work on Stormlight on flights because the books are too intricate, and there are lot of distractions on a plane.

Of course, do note his tweet said he's back to Stormlight work, so don't worry about that

There's a few other interesting things Brandon said on Reddit today. First, the Silverlight novella needs to wait until the Threnody novel for "connective tissue reasons". Next, he again talked about a place with a kite-based magic system which he might plot as a YA book, after he's finished with the Skyward novel, as he would like to do some YA in the cosmere.

Are you excited about a Sixth of the Dusk sequel? Let us know below!

If you'd like to support 17th Shard, feel free to back us on Patreon!