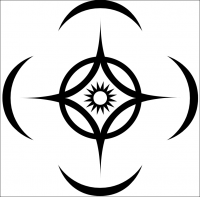 Yesterday, at a signing at JordanCon, Brandon read out something that was very old, which he said we had been waiting for "for a long time". He thought it was about eight or nine years old. It is crazy, and very exciting. It's a piece called The Traveler which is quite cosmere-aware, which Brandon thought he could now reveal. We recommend you just read it with no further introduction, but if you want some analysis, scroll on down. Get hyped.

All of this is transcribed on Arcanum, and you can listen to the audio from the man himself at the links below. Here is Brandon's introduction to this piece:

Let me set up this piece for you. Let me see if I can--I'm gonna look at the file and see when I first started writing this piece... The master computer, that if you ran away with you would get all of my secrets. *crowd laughs* Nope, it says created when I created this new computer, so that doesn't help me.

But this is old. This is like eight years old. Maybe nine years old? And this is a story that I started writing... You can date it by--because you guys have been waiting for it. You can date it by when I told people I had written this thing in interviews. So it may be 2010, I dunno. You'll be able to find out I think by looking through the interview archive.

I wrote this thing that is very cosmere-aware. It's very kind of <inside>--sort of a little bit self indulgent. And I wrote it, I'm like, "I'm gonna post this on my website." And then I thought, "No, this gives away too much. I can't post this on my website, and so I'm not going to finish it. We're going to wait." But now most of the stuff that it gave away then has come out in things like Secret History and stuff like that, so now I can actually read it. So I called this "The Traveler."

And so, here it is. Note, again, this is a very early draft from a long time ago.

A focused southern breeze made the trees sound like they were chattering. Tiny crisp leaves spreading the news of the Traveler’s return. Pure white leaves, clustered along branches like skeletal limbs. Even the bark clinging to the trees was white. In some lands, white meant purity; in others, it meant death. Here, it didn’t mean a thing. It was simply, normal.

The Traveler sat on the mossy white ground, back to the tree, legs crossed idly as he picked at a pomegranate, eating the seeds one by one then spitting out the pits. They fell on the stark moss-covered ground, leaving red juice like blood running across a sterile white floor. To say he wore rags would have be an insult to many a goodwife who kept her washing rags in much better shape than the Traveler's costume. Ragged brown and black canvas, tattered cloak, and scruffy beard, rubbed dark with a black material that might have been soot — or ash.

The leaves suddenly fluttered excitedly behind him, and a strange puff of wind blew across the trunks. A moment later, a figure in simple gray robes walked into the clearing. Clean-shaven and silver-haired, he had the look of an aged scribe, not haughty, but tired.

“So, you’re back,” the elderly visitor said.

“Did I leave? I am the lingering odor you can never quite locate, my friend. Just when you think I've faded you open your cupboard and find, in an overpowering reveal, that I've merely been… ripening.”

The Traveler looked down at his ragged clothing. “I’ve been learning to blend in. Hard to do that in one of my normal costumes.”

“I doubt you’ll ever be the type to blend in.”

“Is that soot in your hair?”

The elderly man sighed, walking across the short clearing and settling himself down on a large protruding tree root. “You can’t keep doing this.” The Traveler continued to eat his seeds, though he had started to chew them up rather than spitting out the pits. “You will just make things worse.”

“Ati and Leras are dead,” the Traveler said, picking a piece of seed out from between his teeth. The elderly visitor said nothing, and the Traveler eyed him, leaning in closely, studying the man's eyes. The pupils were rimmed with a silver far too metallic to be natural, at least for a human.

“You sly old lizard!” the Traveler said, pointing. “You already knew! You were watching! And here you were chastising me.”

“I did NOT interfere,” the elderly man said. ”You meddle in things we promised to leave alone. Things that we—”

Traveler held up a finger, interrupting him, then slowly he pointed at the older man. ”I. Made. No. Promise.”

“You made your choice. Why now seek for things you so eagerly denied? My friend, it’s the dangerous desire, the lust for power best untouched, that created the situation in the first place.”

The Traveler did not reply. The two sat for a time, listening to the winds through the garrulous trees.

“Did you… find what you were seeking?” the elder man finally asked.

The Traveler shrugged, picking at another seed and nibbling on it.

“You will not find a way to restore what you have lost, old friend,” the aged man said softly. ”It is impossible.”

“You don’t know that. The old rules no longer hold.” The Traveler turned the pomegranate over in his fingers. ”Besides, I’ve heard of a place… It doesn’t matter. I don’t care. This isn’t about the dead… or it’s not JUST about the dead, at least.” He dropped the fruit to the ground, wiping his fingers on his riding coat.

“So it’s a simple vendetta, then,” the aged man said, sighing. “How many years have you lived, and you still can’t learn the wisdom of just letting go?”

“A simple vendetta?” the Traveler said. He rose, stalking up to the older man, holding out a finger and touching the man's chest. “You saw what Ati nearly did.” The Traveler leaned down, face even with that of his older companion. “I would not think it MY vendetta that should worry you, old friend.”

Isn't that crazy? It's obviously set right after Mistborn Era 1, right after Hero of Ages, with Hoid (the Traveler) talking to Frost. Not only that but it really sounds like they are on Yolen as well. Remember in The Way of Kings, the part two epigraphs were a mysterious letter of cosmere significance? That was sent to Hoid, from Frost. Then, in Words of Radiance, Frost sent a reply.

This is crazy. What do you think?

Also note, there's lots more JordanCon to transcribe in the JordanCon event in Arcanum. Come help out by signing up for an account, going to the Sources page, and hitting Edit. Come into our Discord in the #arcanum channel and we can help you out, or go here for a guide on how to do that.