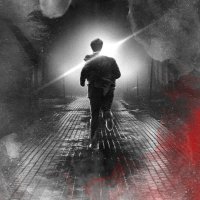 Quick news item for the Legion fans out there - Stephen Leeds: Death and Faxes, the next installment in the series (that's actually not a sequel, as it it takes place sometime between the existing books) finally has an official release date - June 7, 2022 according to Mainframe's Instagram account. It being a Mainframe production suggests that it's going to be an audio exclusive for a period of time, before eventually (hopefully; we are looking at you The Original) getting an ebook release.

For those of you not following Mainframe or Legion closely, Mainframe is the audiobook spoken word entertainment and production company founded by Brandon and Max (Epstein), responsible for projects like Lux, The Original, and now Death and Faxes. Legion - seemingly soft-rebranded as Stephen Leeds, at least for future releases, follows a detective with the supernatural ability to retain information by manifesting Aspects who are experts in specific areas. Unless things have changed, the plan for Death and Faxes is for it to see Stephen track down a hacker.

Legion is not exactly Brandon's most popular series, but it is a fun and light read with surprisingly touching moments. So what do you think of this release? Will you be getting it on day one because you love Stephen Leeds or because you feel an irresistible compulsion to own every word Brandon has every published? Are are audiobooks not your thing and you'll be crossing your fingers for the ebook? Let us know!