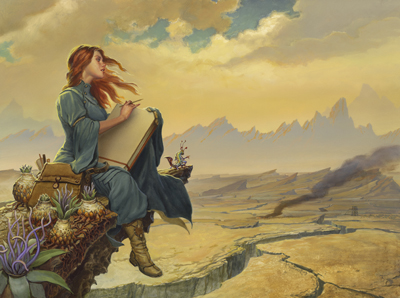 Exciting news! The Stormlight novella--with Lift--that is coming out this fall with the short story collection, Arcanum Unbounded, is now complete, according to comments on Brandon on Reddit. This short story collection is sounding more and more awesome as time goes on. It will contain Mistborn: Secret History, and every published cosmere short story, like Sixth of Dusk, The Eleventh Metal (which was seen in the Mistborn Adventure Game), and The Emperor's Soul.

Someone asked on Reddit if it would have more Marsh viewpoints and Brandon responded that it probably would not. It already had stories from Scadrial, and it was really missing Roshar. A few people asked if there would be a Nalthis short story in the collection, and Brandon's responses have been: "If I can squeeze in something from Nalthis, I will." and "It's on the list of 'things to do for the collection if possible' but I need to get the Stormlight story in first." So, maybe? But don't be disappointed if not.

Also in Arcanum Unbounded will be something amazing for cosmere buffs: Khriss (the writer of the Ars Arcanums in each book) will have an introduction to each planet, and it will contain a map of solar systems in the cosmere. Hype.

Of course, Brandon has a ton of other things on his agenda, like this little thing called Oathbringer, the third Stormlight novel. Well, it's past the halfway mark now on its first draft!

UPDATE: Moshe Feder, Brandon's editor, has finished editing the Lift novella. He reveals the Lift novella's length: 40,000 words! To compare, that's longer than The Emperor's Soul, and the long Lift interlude in Words of Radiance was about 10,000 words long. This means Arcanum Unbounded is going to give you a ton of value for your money, especially if you haven't read The Emperor's Soul yet. Moshe only has glowing things to say about the novella, saying it "glows with 'awesomeness'" and calls it a "new mini-masterpiece." So, get hyped.

The article above also has been changed to indicate that, according to many sellers, Arcanum Unbounded does contain the Emperor's Soul.