Coverage of the Mistborn Board Game from GenCon

A few weeks ago we posted about the Mistborn board game prototype that Crafty Games planned to reveal at GenCon. I found it quite exciting and was desperate for information, and there were quite a few users who felt the same, so I started work on this secret project. I reached out initially to Tellingdwar, and later to Crafty Games, about collecting and posting information about the game for those of us who could not attend. I hope you all find it as interesting as I do! 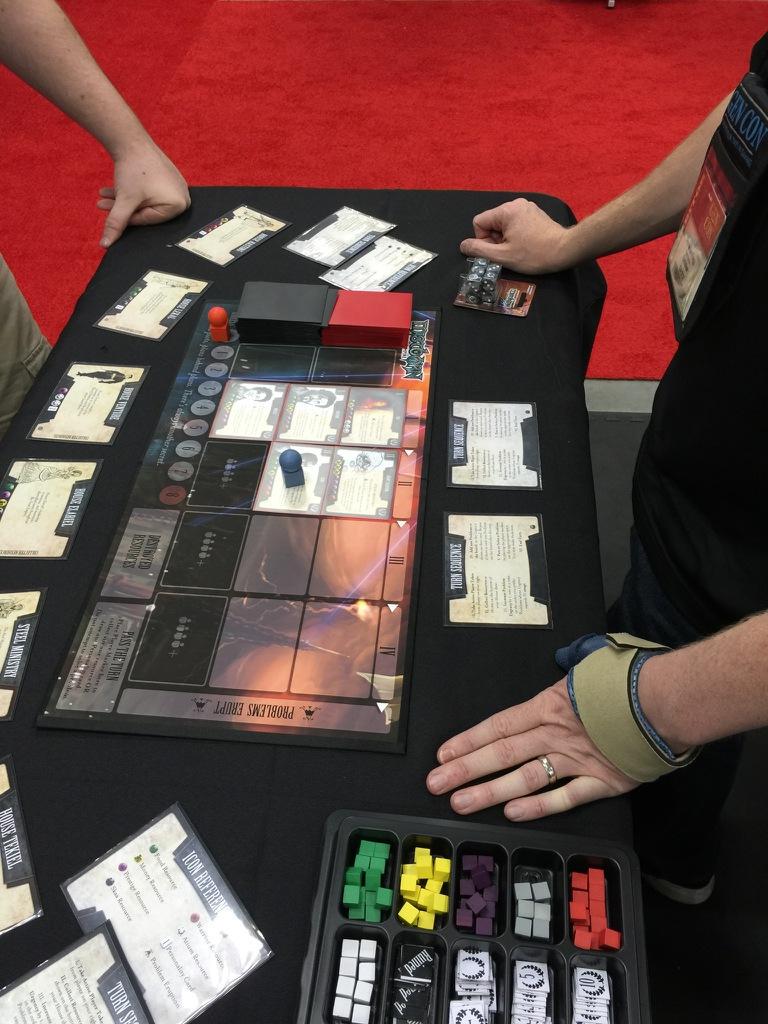 Final Empire: A Mistborn Board Game

Final Empire is a semi-cooperative, resource-manager game set during the events of the first Mistborn novel. Three to five players assume the roles of various factions and must work together to solve the "Problems" facing the Final Empire. In order to solve these problems players must expend a certain combination of resources, but in return they receive Favor from the Lord Ruler.

The six factions available to play at GenCon were the Noble Houses of Elariel, Hasting, Lekal, Tekiel, and Venture as well as the Steel Ministry itself. The final release plans to include a total of ten factions. Each round players produce resources (food, money, prestige, skaa, warriors, and atium) in different proportions and combinations based on their faction. House Venture, for example, keeping in line with the books, produces atium, while the other factions cannot on their own. Atium works as a sort of wildcard, you can use it in place of any other resource, and you can convert between different resources to get something that is missing, but in the long run the players must work together, pooling their resources, to succeed.

There are 4 tiers of "Problems", at the start of each turn a problem is added to the board in the corresponding column and each pre-existing problem moves up one tier. If a problem passes tier 4 than it is said to "Erupt" (a nice nod to the Ashmounts) and it causes various problems for the players, such as increasing the level of "Unrest" or giving players "Disfavor". The main part of gameplay is the negotiation between players to solve these problems. Getting the right number of resources is only part of the issue, as players also have to decide how the reward of Favor tokens is divided. Anything except Favor gained in previous turns can be negotiated: resources, Personality cards, out-of-game favors, etc. Short-term deals concern the current round (such as Players A, B, and C agree to solve a problem and contribute resources equally and will divide the Favor equally) and are binding, however long-term deals which concern future rounds (such as Player B telling Player A that if they let B help them with this problem they will let A help them a problem on their turn) are not. Which has the potential for a lot of scheming and backstabbing.

Another gameplay mechanic is the "Personality" cards. These cards can have a variety of effects, such as altering the number of resources needed to complete a mission or change a problem’s tier. They can also be used to add advisers to one’s faction, or kill the advisers of another faction. These advisers can do things like generate additional resources, or even make long-term agreements binding.

The game can end in two ways, either the Unrest reaches 8 or a special problem card (Vin) is resolved. If she is not defeated and is allowed to erupt she increases the Unrest by 4. If the players are able to defeat Vin then the player who has the highest amount of Favor is the winner. If the Unrest reaches 8 then the rebellion occurs and the player with the least Favor (the faction furthest from the Lord Ruler) wins.

The board game seems to have been received extremely well, by fans of the series and people unfamiliar with it alike, I’ve yet to find a negative review or post about it, they’ve all been very positive. Tellingdwar was actually a volunteer for Crafty while he was there and demo’d the game for five hours each day. He enjoyed it so much that one day when his shift ended he commandeered one of the boards and continued playing it with some of his friends. I’d say that is definitely a testament not only to its "fun-ness" but also to its replayability.

Plans for Release and Expansion (plus naming rationale)

Crafty Games plans on doing a Kickstarter later this year (around Oct/Nov, which would correspond fairly well with the release of Shadows of Self) with an actual release of Quarter 4 2016. There are also plans to release expansions based on the later books as well. These would use the same board and tokens but the cards and factions will be swapped out to match the narrative of each book.

These expansions also tie into why the game is not called "House War". I will admit that I was one of the people who greatly preferred "House War" to "Final Empire" but Crafty's reasoning does make total sense. While "House War" does fit well with the base game with its rival Noble factions, the expansions will not have those same factions and will deal with different themes, as such "House War" would not be an accurate descriptor.

Crafty also talked briefly about what’s coming up for the Mistborn Adventure Game in the relatively near future. Up first is a supplement focusing on the skaa, much like Terris: Wrought of Copper did for the Terris people. The title, Skaa: Tin & Ash, was revealed earlier this year and it’s currently looking at a release during the first quarter of 2016.

In addition to that there is a follow-up to their Alloy of Law supplement in the works. With the release of Shadows of Self and Bands of Mourning on the horizon they have plenty of new material to work with. Crafty is currently looking at it releasing sometime during 2016.

So what do people think of the game? Does it sound like a game you’d like to play? Will you be backing the Kickstarter? Is anyone excited for the MAG supplements? Check out our forum topic here to discuss everything!