Signed and Numbered RoW On Sale Tomorrow at 10am Mountain, Store Updates, and More! 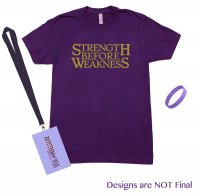 They say there will only be 1200 copies available, and restricted to just one book per customer. Weller's tries to get books shipped to you so you get them on the release date of November 17th. Weller's IS doing personalizations, but that will require a donation to the charity Worldbuilders. The deadline for personalized copies will be at October 10th at noon Mountain time.

People who buy Rhythm of War through here will have an access code to the virtual book launch on November 17th. This won't be the only place where you can said access code for the release party, and we'll update you when we hear of more places.

Brandon's store had some maintenance today, and it looks they are on a new system now. Plus, they have some new and returning items! First up is the Rhythm of War Release Party Swag Pack. It contains a nifty purple t-shirt, a silicone glow-in-the-dark bracelet, a lanyard, and a release badge. That's fine, but the add-ons are the cool part, with a Willshaper pin (different from the Kickstarter pin), a sticker pack, and a chicken scout patch.

Also in the store are some last copies of the first printing of the Warbreaker leatherbound. Apparently the printer had some spares that they shipped to Dragonsteel. Neat! Lastly, there's a hardcover of Infinity Blade: Redemption which I believe is also new to the store.

[Update 9/24] There are also face masks on Brandon's store!

The Sandersonian Institute of Cosmere Studies, another cosmere podcast, is interviewing Dragonsteel's Art Director, Isaac Stewart, on October 5th at 7:30 Pacific. That will be on their Twitch at twitch.tv/inkeeperstable, and you can send them questions to ask Isaac at [email protected] with "Isaac" in the subject line.