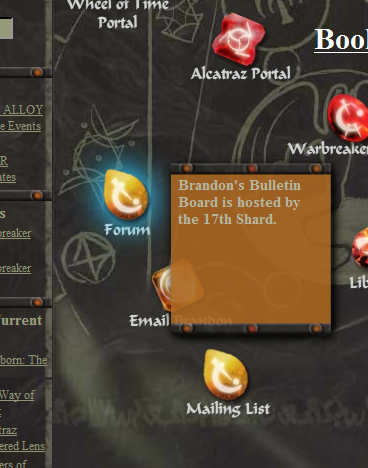 It is a bittersweet day, because Timewaster's Guide is closing its doors after many years. It feels like an end of era, but that just means there is a new beginning. There are neither beginnings nor endings to the turning of the Wheel... wait, wait. Let me try this again.

Timewaster's Guide was the place where Brandon's forums were located. It was the place where I met a ton of amazing people. It's through this site that our staff met. So, with a community that has such history to it, I'm saddened to hear that TWG is closing its doors.

The reason was because the site got hacked. Now, don't panic if you were a TWG member. What happened was some jerk hacked into the site, and posted a gigantic spreadsheet of emails and passwords. However, the passwords were salted and hashed--fancy language to say that the passwords were encrypted. It would be theoretically possible to break the password (especially if the password was really simple), but I think the most important thing to do is, if your email on TWG used the same password as your TWG account, I'd recommend changing passwords. Ultimately, I would not worry. About the worst thing that could happen is you get some spam, because the emails are publicly posted. Just make sure your password is good and everything will be fine.

In any case, the Spriggan, the administrator on TWG said it would be challenging to fix the site due to the great deal of custom code on it. With that site closing, a few key communities vanish with it: Brandon's, Dan's, and the Reading Excuses writing group.

It is phenomenally humbling, then, to announce that we have now become the official forum for Brandon Sanderson. Check out the screenshot.

In addition, we are pleased to give Dan Wells's forums and Reading Excuses a home as well. It's only fair, because Dan was so gracious to give the writing group of Reading Excuses (which I have had the privilege to sometimes-moderate) space on Timewaster's Guide about three years ago.

If you've never been to 17th Shard before, welcome. I hope you will enjoy your time here as much as you did on TWG. We're slowly making the site better with each passing month (better server hosting is coming eventually!). The Welcome to 17th Shard topic explains all about the site, its features, the rules, and--most importantly--the meaning of the pretty colors some members' names are in.

And, um, welcome to the official Brandon Sanderson forums? Wow. That feels weird to say. I don't think we'll get over that anytime soon, if ever.

You guys know who Dan Wells is, right? He's this amazing author of excellent psychological horror novels. The first of his John Cleaver series is called I Am Not a Serial Killer, and if that title doesn't make you want to read it... you clearly have issues. And, believe it or not, the two sequels are blow that superb first novel out of the water. You're missing out if you aren't reading his stuff.

As for you Reading Excuses members, I've posted a topic in our new home about the transition. I’m going to send you an email shortly, but basically, if you submitted this week, go ahead and re-post it. We'll do this week's critiques like normal.

Some people have asked us if 17S is susceptible to a hacking, too. I would not worry. We are using very modern (and expensive) software in Invision Power Board. While it's always theoretically possible, I'm confident we will be okay, considering we pay for this stuff.

And if you're sad that TWG's data is gone forever, don't be! I'm working with Spriggan to get a backup of the forums going, which will be read-only. I'll keep you all posted about the progress.