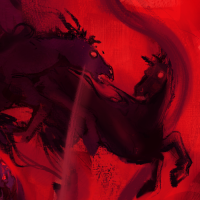 Those June art pieces just keep on coming, don't they? Let us know if you'd like us to do more of these simpler but more numerous art commissions in the future - we were thinking we'd those maybe once or twice a year, but art reveal season is fun season!

And speaking of, this week we've got the King's Drop for you all! Paintweaver (Instagram, Tumblr) is another artist we've wanted to work with for a long time, and the relative simplicity of this illustration (plus scheduling luck) finally gave us this opportunity. The illustration is absolutely gorgeous, and the shifting smoky images inside it are an amazing representation of the captured Thrill. Fingers crossed that the Kholins keep this safe and don't go and, I don't know, throw it in the ocean or something!

We've got a few more versions of this, with slightly different colors and backgrounds, and we'll release those to our supporters some time in the future, once art reveal season relaxes a bit.