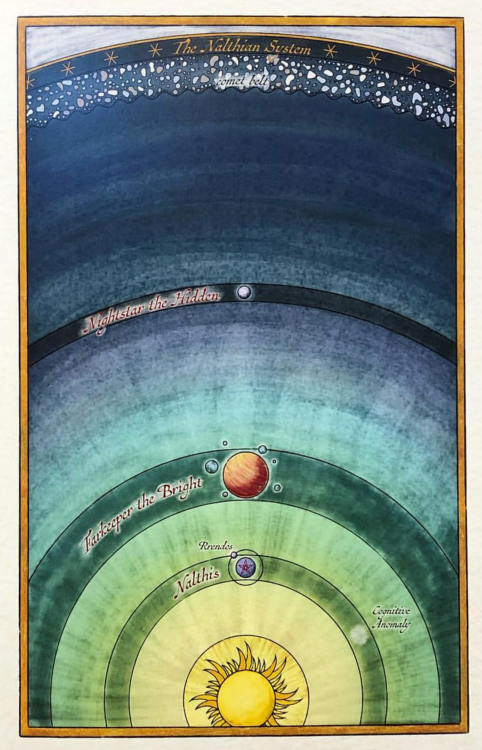 With the release of the Warbreaker tenth anniversary edition on the horizon, Isaac Stewart took to Instagram today to share an image of the brand new Nalthian System star chart! Check it out!

Following the design of the other cosmere star charts found in Arcanum Unbounded, the new star chart reveals a yellow sun, a single moon around Nalthis, a gas giant with several moons of its own, a solitary outer planet, and a distant comet belt. The planets have names reminiscent of Returned of the Court of the Gods, Farkeeper the Bright and Nightstar the Hidden, while Nalthis's moon is named Rrendos. If you look closely at Nalthis, you can catch a glimpse of the new symbol for the planet. The red, five-petaled flower, a Tear of Edgli, is similar to the designs Isaac shared in Germany earlier this year.

Most interesting of all, however, is the white, planet-sized "Cognitive Anomaly" located along the orbit of Nalthis. Cognitive anomaly? What?! Share your observations, ideas, and theories in the comments!

Prints of the new star chart are available now on Brandon's online store. You can get a single print of the Nalthian System if you already own the rest, or you can buy the full set. Note that this chart is NOT included in the upcoming Warbreaker leatherbound.

In other news, if you aren't already signed up for Brandon's newsletter, you should change that ASAP!

Yesterday, Brandon announced a contest on Twitter, and the prize is an early reading copy of Starsight AND a copy of all four currently released Cosmere leatherbounds! The contest will close next Friday, November 15th, at noon PST. How do you win? That's a good question, but you'll have to wait until tomorrow for an answer! Details about the contest will be included in the next edition of Brandon's newsletter, which should reach your inbox tomorrow, November 8th. So like I said... if you aren't already signed up you should do that here at your earliest convenience!

As if that's not motivation enough, Brandon also announced earlier today that tomorrow's newsletter will include the first two chapters of Starsight, which will be out later this month, on November 22nd. What are you waiting for? 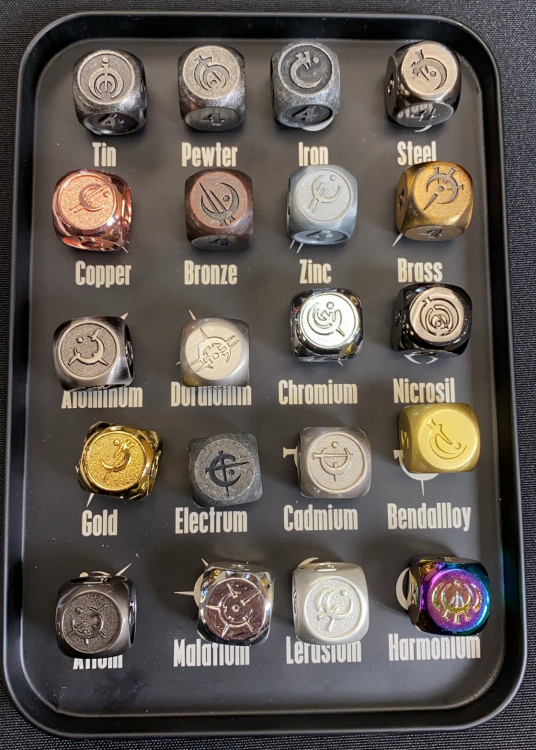 Lastly, Crafty Games has been sharing images of the latest samples for their new metal dice--and they look incredible!

Crafty Games published the pen-and-paper Mistborn Adventure Game in 2011 (along with several supplements since then) and the Mistborn: House War board game in 2017. In 2015 they ran a successful Kickstarter for a set of Mistborn-themed dice with the Allomantic symbols. The original set were not metallic and only included ten metals.

As you can see in the image to the right, their newest set of metal dice includes all twenty known Allomantic metals! More details are included in their February update on their Kickstarer page. Stay tuned for more details on the dice and their upcoming Kickstarter campaign.