Mistborn Board Game Prototype to be Unveiled at GenCon 2015 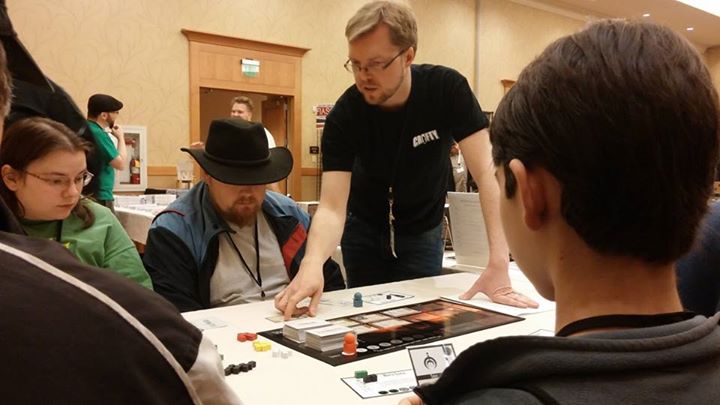 Crafty Games (makers of the Mistborn Adventure Game) have just posted their plans for this year's GenCon (July 30 - August 2, only a little over a week away) which include several pieces of Mistborn-related news. Most notably they announced that they will be showing their prototype for a Mistborn board game. After announcing that it was in development back in March without much information, they have finally given us a title, "Final Empire: A Mistborn board game", as well as a brief teaser description.

Final Empire: A Mistborn board game (design by Kevin Wilson)

Become the head of a Great House of Luthadel in this game of negotiation and betrayal, set in the world of Brandon Sanderson’s Mistborn novels. Contend with myriad problems plaguing the Final Empire — rampaging koloss, disease, social unrest, even the heroes of the novels — and with every step jockey for the Lord Ruler’s favor. At the end of the story will you rise to power and prestige, or fall in ruin and disgrace?

They've also announced a panel entitled "Mistborn: Scheming Across Scadrial", which they have not gone into much detail explaining, only that it is "a little more than it seems on the surface" and that "if you’re a player or reader of the Mistborn Adventure Game you’ll definitely want to sit in if you can."

For fans of the Mistborn Allomancy Dice which were Kickstarted at the beginning of this year, Crafty Games will be giving out a free Aluminum dice (a design not included in the retail set or the exclusive Kickstarter set) as part of any purchases people make at the con.

We also finally have a rough idea for when the release of the next MAG supplement, "Skaa: Tin & Ash", will be. It should be hitting stores some time this winter!

So, is anyone planning on being at GenCon? Please tell us if you are, we'd love to get firsthand reports of the game and panel!

Check out our forum topic here to discuss the game and other GenCon plans!