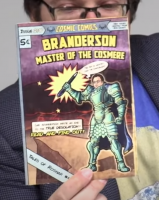 Before we look at what happened in the last two live signing sessions, there's a chance for you to win a set of leatherbound editions of Brandon's books (All of Mistborn Era 1 plus Warbreaker, unforunately Elantris is unavailable) or one of two complete sets of The Stormlight Archive hardcovers! (Note: This originally stated there were three complete sets of leatherbounds to be won, but we were mistaken on that) Brandon is celebrating surpassing 50,000 subscribers on his YouTube channel and wants to give something back to his fans. All you have to do to enter is subscribe to Brandon's newsletter and send an email to [email protected] before June 6. It doesn't matter what you put as subject or content, the winners will be selected randomly from all received emails. The giveaway is held internationally, so as long as no restrictions apply for shipping from the US to your country given the current global situation, feel free to participate. If you haven't been a subscriber to the newsletter so far, this also is a great chance to get yourself a copy of the White Sand prose version. A link should be handed out with every issue you receive.

With that out of the way, let's see what we learned in Brandon's most recent livestreams. He was signing the title pages for The Way of Kings leatherbound edition in both of the sessions and is now finished with them. This means they're all ready to go to the bindery to be finished in time for shipping to the backers of the Kickstarter campaign. Brandon mentioned that they would launch it in the first week of July, so mark that in your calendars! If you've missed what the Kickstarter is all about, check out our previous summary on all we know so far. We've since learned that the Bridge Four poster will come rolled up in a tube rather than being folded, so you can stop fretting over the beautiful piece arriving with creases all over Kaladin's face!

Moving on, Brandon also had a chance to talk about Dark One in response to a question from the audience. The graphic novel is done and we can expect to get it probably before the end of the year, but due to the pandemic, the release will be digital first and you'll be able to pre-order it through Brandon's store. To get a sneak peek of what Dark One will be like, a preview of the first chapter will be handed out as supplemental to larger orders such as t-shirts or books from the store. This was originally intended to be given to comic book stores for Free Comic Book Day, but the current situation has made that not viable.

In other Dark One related news, Brandon will most likely coauthor the audio original version of the story with his friend Dan Wells. Moreover, the showrunner of the TV series, J. Michael Straczynski, has already sent Brandon a first draft of the script for the pilot episode. Apart from that, things are moving slowly on that front.

Of course Brandon also talked about other fun stuff and gave tons of writing advice, so definitely check out the VOD of the streams below! You'll also get to see some awesome fan mail, such as the "Branderson - Master of the Cosmere" comic sent in by a fan all the way from Australia. If you'd like to send in your own fun gifts for Brandon or simply a letter showing your appreciation of his works, feel free to ship them to the following address:

This wraps up the May 28 livestream, but there was another on May 14. This one featured Brandon's mom - the Goober, as her son calls her - and she was able to corroborate some of the stories that Brandon's father had to share in a previous livestream. She also talked about more of her own memories of raising Brandon and they're definitely worth listening to!

To demonstrate that these livestreams are good for more than just keeping you two hours of entertainment, we also got a new canonical term from one of them! Cytoverse, coined by our very own queen of the gators, @thegatorgirl00, is now officially approved as a name for the universe that Skyward plays in!

If you'd like to ask your own questions or tune into one of these events, feel free to use any of Brandon's social media presences. You can catch him on his Twitter, his YouTube channel, his Twitch channel, or his Facebook profile!