Interview Database & Around the Cosmere 2-17-12 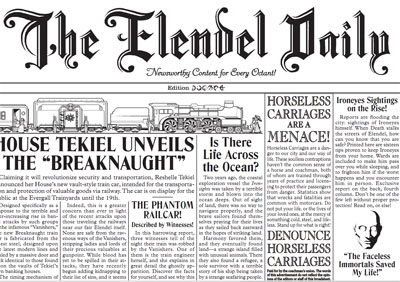 Hello, and welcome to Around the Cosmere.

So we have two REALLY major things to announce.

First off, the date for A Memory of Light has recently been released- January 8th 2013. That's right, next year. To see Brandon's post about it, look here, and to talk about it on the forums, look here.

In better news, there has been a project that has been months in the making. Theoryland and 17th Shard were tired of making two separate databases, Terez's Interview Database, and my Brandonothology (which has always been fairly rough). So we worked together, transcribing interviews, collecting signing reports, and put it in a beautiful actual database, containing all of Brandon's and Robert Jordan's signings, reports, Q&As and interviews.

This thing- man, it's fantastic. It has searching (which is fast as lightning), tags for common subjects (from Atium to Brandon on Writing), and over 700 reports. Yeah, it's pretty amazing. And the formatting is really nice, consistent, and I believe we plan on using this for years to come.

Marie and Terez from Theoryland have done an incredible amount of work, and have spent probably hundreds of hours on this project. They are amazing, and should be thanked for their hard work.

Oh, I guess I should probably link you to it, huh?

Note- Right now, it is mainly WoT, which makes sense since It's been around for 20 years, while Brandon's been around for only 10. Hopefully, with your guys' help, we can help tip the balance. Whenever you go to a signing or a Q&A, or find a video online that we don't have on here, post it in the Events, Signings, and Stalkings section of the forums.

If you have any comments, you can leave them in this thread.

Now for the rest of the normal information:

In Brandon's update, he mentions a new Alcatraz annotation, as well as a new Twitter collection and a new Writing Excuses.

Brandon Sanderson and Robert Jordan got mentioned on Jeopardy! on Wednesday.

"Robert Jordan's death in 2007 didn't stop the series called "Wheel of _____. Brandon Sanderson now pens them." And yes, the person got it right.

Also, it looks like someone decided that they were going to attempt to build Soulcast houses! (Not really, but still, it's pretty interesting)

And- if you're an artist, and you've got some art of Kelsier, (or of any of the other contestants) Suvudu would like you to submit art for their annual cage match of fantasy characters (which gets a ton of attention). You can do that here.

In in-forum stuff, My Spren Hypothesis is up, and an interesting thread about Emotion and Investiture is up as well.