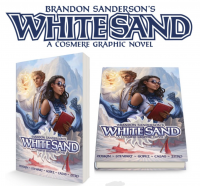 In collaboration with Dragonsteel, Dynamite Entertainment has begun an IndieGoGo campaign to fund and pre-order the new omnibus version of the White Sand graphic novels. In an earlier announcement, Nova had indicated that the English omnibus release would be in late April, but it turns out that was incorrect. Dynamite's announcement includes the information that the omnibus will arrive for backers in June/July, with a mass market release in November. This project has been in the works for quite some time, with Isaac Stewart and Dan Dos Santos contributing. In addition to some continuity fixes, it also includes an all-new prologue drawn by Nabetse Zitro and an Ars Arcanum.

The campaign launched on February 1st and funded its $10,000 goal almost immediately. It will continue through February 22. Backers are expected to receive their books sometime this summer, before the mass market release in November.

There are four tiers available for backing, each of which entitles the backer to a single perk:

Initially, the only way to get the Hardcover Slipcase Edition was to back the Signed Hardcover Slipcase Edition tier (limited to 1000 copies, all now claimed), but Dynamite announced today that they are also able to offer unsigned copies of the slipcase edition at the same price. Additionally, Dynamite is extending the period during which the above Early Bird prices will be available so that backers can adjust their preferences. These prices will increase later in the campaign. All four perks are also available as add-ons.

If you want to get your hands on any edition of the White Sand omnibus, now is a good time since backers will get it at a reduced price and earlier than the broader November release. Enjoy!