Shire Mint's Mistborn Coins Are Awesome, and Here's Its Kickstarter 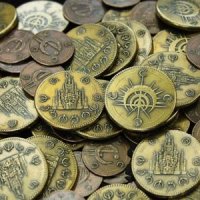 I know we just had a big Kickstarter, but there's another one coming up, and it's really cool. Shire Mint, folks who made wonderful fantasy coins for Lord of the Rings, Game of Thrones, and Wheel of Time, are Kickstarting Mistborn coins from both Era 1 and Era 2. The coin art was designed by Isaac Stewart, inked by Ben McSweeney, and overall, the design, metals, weights, and styles were all approved by Brandon. For all intents and purposes, these are canonical coins. How freaking cool is this. It's basically new lore for Scadrial. I am in.

Shire Mint has worked with Team Sanderson for a year, and it sure shows. Check these coins out:

As a history lesson, these coins are officially "imperials" but are colloquially boxings as it displays Kredik Shaw, the Lord Ruler's "box."

This has an image of the Lord Ruler's face, text that says "one clip," and on the back, the symbol for copper, surrounded by the iron symbol, which is 1 in the Steel Alphabet.

On the front, we have Vin, looking awesome, and on the back, it has the copper symbol, the number 1, and the words "one clip".

I must say I am completely enamored with the Era 1 boxing overall, as a huge fan of the Lord Ruler. I need this in my life. However, Era 2 is cool as well! The designs are absolutely amazing and look incredible on the coins themselves.

The backing levels are pretty reasonable:

You can also buy the bag and display box separately on add-ons.

Since Shire Mint has a very good reputation, I have no doubt the product will work great, and its goal isn't that high (especially compared with the Kaladin album). This is going to be a thing, and judging it's already 30% of the way funded before I post this, in a half hour after it's been live, this is going to make it. Check it out!