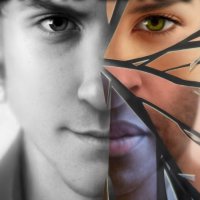 Hey there Sanderfans, yesterday Tor.com announced the title and revealed the cover art for the upcoming Legion collection Legion: The Many Lives of Stephen Leeds. This will include the original Legion, Legion: Skin Deep, and the never-before-published Legion: Lies of the Beholder which "delves into Stephen’s backstory, his interactions with Sandra, and the nature of his aspects"! The cover art is from the always phenomenal Miranda Meeks (who you may remember as the artist for the covers of Mistborn: Secret History and Shadows for Silence in the Forests of Hell). Check it out below:

For those of you who have the Subterranean Press editions of the first two novellas, don't worry. There will be a solo limited edition of Legion: Lies of the Beholder.

In other news, Brandon is still hard at work on Skyward, but in the progress bars on his website he has one for another "Secret Project". In a blog post Brandon described it as a novella, that he has not spoken about before, which is not in the cosmere. He also describes it as something he "needs to write". Speaking of secret projects, at Brandon's recent Orem signing he also revealed that he has written an outline and a script for a new graphic novel that will be released after White Sand Volume 3 is completed. Hopefully Brandon will reveal more information about these projects soon.