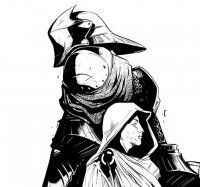 Today, Vault Comics have announced the first Dark One graphic novel set to be released in 2020. Jackson Lanzing, one of the writers, also tweeted that the manuscript was 209 pages, and they started work on it eight months ago. He said next year, "you can finally join us in Mirandus," presumably the world of the story, and said "Down with the Narrative. All hail the Dark One."

For those of you who may have forgotten, Dark One is set to become a multimedia project involving a television series, graphic novels, a book series and a podcast. This is the story of a young man who discovers he is fated to become a tyrant and destroy a world of magic. You may also remember this as the story where the ground carries an electrical charge.

This graphic novel will be published by Vault Comics, as opposed to Dynamite Entertainment who published the White Sand series, and co-written by Jackson Lanzing and Colin Kelly with art by Nathan Gooden.

Let us know what you think, excited about Dark One? Does this multimedia approach interest you? Tell us below!

If you'd like to support 17th Shard, feel free to back us on Patreon!