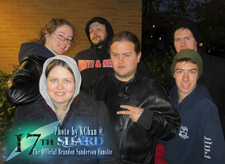 Hey guys! So as you're all aware, 11/08/11 marked the release of Mistborn: The Alloy of Law, after a long wait filled with excitement and anticipation. And, as usual, Brandon celebrated the release of his latest book with a midnight release party at the BYU bookstore.

I was fortunate enough to attend, and spent the weekend with several Sharders: I shared a tent with Chaos, Comatose, and Shivertongue, and ours was right next to Rubix and FirstRainbowRose's tent. We were also joined over the course of the weekend by Zas678, Link Von Kelsier Harvey, and mycoltbug. I'm also told that Tien and Finallity stopped by the tent, but I was inside thawing out at the time. Sorry I missed you, guys!

The party itself was incredible. There were so many people there, both current and future Sharders, and a good number of awesome costumes! The staff members there outdid themselves to make it an awesome party, from letting me draw on them with eyeliner to standing in a corner of the bookstore running games to spending all night yelling at the tops of their lungs during Trivia. If you were there and had a good time, be sure and thank the staff for all their hard work! It couldn't have happened without everyone who pitched in. There's an award coming your way, guys, as soon as I can make it.

Isaac and Kara Steward from Inkwing were also great - not only did they bring tons of T-shirts to give away, but they stayed throughout the signing, and it was that much more awesome because they were there. Thank you so much, you two! Also, did everyone see the quilt Kara made for baby Kaladin? It's an awesome blanket for an adorable baby with the best name ever.

The signing went until 4 AM, but Brandon stayed until everyone's books were signed, going so far as to stand out in the cold and sign the staff's books and answer more question when the bookstore kicked us out. It was amazing getting to finally meet him - he is every bit as gracious and genuinely nice as everyone has said, and a truly fun person to talk to. I feel very honored that I was able to meet him the way I did, and that I had the privilege of helping out during the signing, even if it was just a small job. Thank you, Brandon, for being an awesome guy and for treating your fans so well! I'm sure I speak for all of us when I say it means a lot that you give us so much time and attention when you're already insanely busy.

Now, to you, Sharders: those of you who were there, and those of you who got Sam Weller's signed books. I managed to catch a couple of the Q&As and clues written in books, but I wasn't able to record anything, and I can't remember it all. If you had a clue written in your book or had a question answered - even if it's a RAFO - post about it here so your fellow Sharders can benefit! Also, if you got any pictures, post them in our gallery so everyone can see. You can also read more about the line from Mi'ch's point of view in this thread. Perhaps I'll blog more about my own experience later as well, but I think this pseudo-signing report is all I can manage at the moment since I still have pics to process, so that brings us to the end of this particular post.

See you 'round the Cosmere!