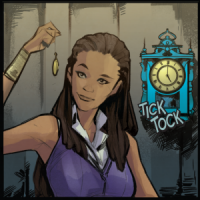 It has been... a few months since we were supposed to get the White Sand omnibus, but at long last, it's here! The digital edition, at least - as of today, you can purchase the ebook from Dynamite here. The full price clocks in at 40 USD; here's what that money will give you:

You might fairly be wondering what happened to the physical editions of the book, and the answer is, they are coming soon-ish. In an Indiegogo update from December 15th, Dynamite has revealed that they've received the first shipment of the softcovers from the printer, and will begin sending them immediately. The hardcovers, meanwhile, are still awaiting their printing; as such, it is impossible to tell when they will arrive.

Finally, a quick note about our spoiler policy here on the Shard, both the forums and Discord. White Sand is not a new book, and a scattershot way in which the various editions are distributed makes it difficult to establish when to start and end a spoiler period. As such, we are not establishing any spoiler period for the omnibus - you may discuss it untagged in all spaces where the plain old White Sand can be discussed.  As for the Ars Arcanum, we are fine with people posting pages or fragments of pages when it is pertinent to the discussion at hand - however, we will not allow posting the entire AA in bulk or single pages without context.