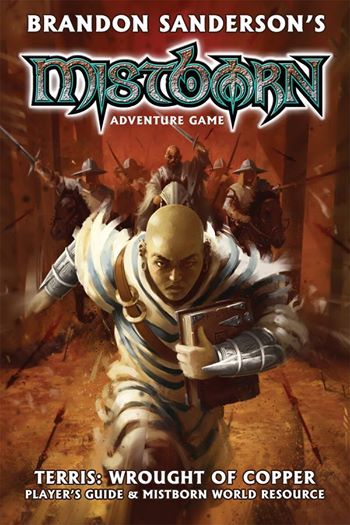 Crafty Games has revealed what the first supplement to the Mistborn Adventure Game will be: Terris: Wrought of Copper. We at 17th Shard had thought its next supplement would be an Alloy of Law-era one, but this is not the case. That doesn't mean we aren't excited--to the contrary! Crafty Games has worked with Brandon to develop material that provides a detailed look at the Terris Dominance and its people, which is definitely not something we saw much of in the original trilogy.

Other than that, details on the supplement are scarce, but Crafty Games will be having three Google+ Hangouts where they will reveal more, and the first one is actually tomorrow:

will be an overview discussing "what players, Narrators and fans can expect to find in this book." will discuss the Rules as well as "all-new insights into the awesome power of Feruchemy." will discuss "adventuring in the Terris Dominance."

We'll keep you posted on what is revealed at these Hangouts, so stay tuned, but definitely go watch them if you have time!

In unrelated Mistborn news, the film rights to Mistborn have lapsed last week. Paloppa Pictures had owned the rights, and Brandon says they were wonderful to work with. In fact, news on the Mistborn film over the years had been immensely positive, with Brandon saying he liked Paloppa's progress and their screenplay a lot. However, they were unable to get the film into motion. As such, Paloppa's rights have lapsed, so theoretically, they could be sold to someone else. It's sad we can't see Paloppa's good vision for Mistborn on the big screen, but with the rights available again, we could see a production actually start eventually.

On Brandon's blog, he says any offer for the Mistborn film rights would need to be "very serious" in order for them to consider it. But, you know, if your uncle is J.J. Abrams or something and you love Mistborn, get your people to contact Joel Gotler at Intellectual Property Group. Wow. That sounded way too official for 17th Shard...

Thanks WeiryWriter for your contributions to this article!

Cover illustration for Terris: Wrought of Copper by Tommy Arnold.