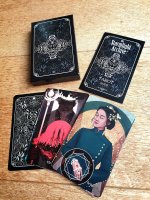 It's news roundup time again, friends! Last we met, we talked about Fortnite Kelsier (who is out of the store now, actually), Cytonic's title reveal, and some Cytoverse novellas. Today's news haul is no less exciting:

Let's go over some details.

Tara Spruit's Stormlight Archive® Tarot Card Deck went on sale and was instantly sold out back in March of 2020, and fans who didn't manage to grab a copy on time have been asking for a reprint. Well, some dreams do come true - the deck is back in stock for preorders. Get yours in before the end of June. The card art is absolutely gorgeous, the cards themselves are solid enough, and even the box is neat.

Second in our list is a bit of news coming from Brandon's weekly update video from June 7. He and his friend (and partner in shenanigans) Dan Wells are launching a new podcast this Wednesday. The podcast will be much less structured than something like Writing Excuses, and will feature mostly the two of them talking about random, usually pop culture-y, stuff. The podcast is still unnamed, but we should expect to hear about it soon.

And finally, from the same weekly update video, comes... well, not an announcement. Nothing was announced. Especially not about the Doomslug plushie precariously balanced on Brandon's shoulder for most of the video. But an announcement is coming in the future, and if one were to guess, something to do with the plushie seems like a safe bet. I personally believe that the cageyness around all of this is because the plushie design is not quite final, so Brandon doesn't want to promise until he is ready to announce something more concrete.

And that's the end of our news recap! Join is in the comments or our Discord server and tell us what you think of all of this.