Skyward Three Update! (and other tidbits) 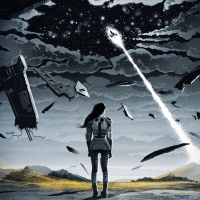 That's right folks, more book news! Brandon took to Reddit this evening to bring us the FIRST in a series of updates on Skyward 3! You can read the update in the r/BrandonSanderson subreddit. Let's break it down.

Though the Skyward series was originally announced as a trilogy, he reported a few years back that it would require an extra novel. Brandon explains in his update that he didn't really sit down to thoroughly outline the entire series until he was writing book 2, Starsight. Through that process, he decided the story was best told through four books rather than three: a standalone starter book with a follow-up trilogy. Sound familiar? Yep, the same thing happened with Mistborn Era 2. Though hopefully we can expect this particular series to wrap up in under a decade.

Sanderson reports that he'll be taking the next week to update his outline for novel, which is in pretty good shape. After a quick break to finalize Dawnshard, he plans to begin the writing the book on October 1st. With the book targeting 100k words, Brandon plans to be finished with the first draft by the end of the year! So, after the revision process over the first half of 2021 he hopes that we'll have the book in hand next November--two years after Starsight.

The novel doesn't have a title yet. Though he previously mentioned the tentative title "Nowhere", Brandon later reported that the publisher wasn't very fond of it. He has also mentioned that the book will have a second PoV character alongside Spensa's, but we don't know much more than that. We can expect the next status update in November, so perhaps we'll come up from the depths of new Stormlight content for a breather and find out more then!

As always, Brandon made sure to profusely thank us, his readers, and to apologize for the long delay since Starsight was published. If you've got a Reddit account, go show this man some love because we don't deserve him!

For those still crying ever since my joke about the looong road that Wax & Wayne book 4 has been on, rest assured that Brandon has previously expressed that it should be the NEXT thing on his list after Skyward 3 (yes, before Skyward 4). If everything goes according to plan, it sounds like we can finally expect it sometime in 2022. Though we've got a lot on our plate until then, so let's take it one book at a time!

A few other minor items of note...

And that's it for the time being. Now don't you have a book or preview chapter to be reading?