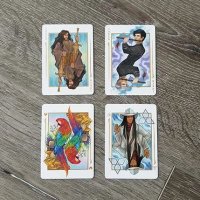 The last news update wasn't even a week ago, was it? Sanderson pays no heed to our mortal efforts to keep up with what he's working on!

In Brandon's latest weekly update, he let us know that he is 7,000 words into the final Wax & Wayne book after about three days of writing. He hopes to pull that up to an average of 2,500 per day but is pleased with this early pace. The book is planned to be a bit longer than the previous Mistborn Era 2 books, with a target word count of 150k. (for reference, Bands of Mourning is the longest at around 125k) This puts the book at 7% complete, with a goal of finishing the book by August 1st.

Brandon also took to Reddit late last night to give us some additional updates on the book! Right off the bat he confirmed that The Lost Metal will be the final title of the book, as he has been planning for quite some time. It sounds like the Dragonsteel team is quite pleased with the book's outline, and Brandon's writing group is now in the process of offering feedback as he writes. He sounds like he's having a lot of fun with the characters so far! More good news: if the book gets finished on schedule, Brandon's team will be ahead of schedule for the first time in over a decade!

Speaking of schedule, Brandon interjected some comments about his upcoming publication plans in the Reddit post as well. And here it is:

We're going to see a bit of a break because, as Brandon has described elsewhere, he plans to write all three Mistborn Era 3 books to some degree before the first is published. This is what he did with the original trilogy, and it gives him a lot more control over the narrative. The downside (perhaps) is that we aren't likely to get anything big in 2024. However, as you can see, when it rains, it pours! Note that these Era 3 books will be 200-250k words each, similarly to the Era 1 books, so we've got a lot of reading ahead of us! He has toyed with the idea of trying to squeeze some other books in between Stormlight 5 and 6, but we'll have to wait and see what happens there.

Back to the weekly update! Brandon spent MOST of this update sharing his thoughts about a potential art book, likely focused on The Stormlight Archive. He has said for several years that the gap between writing Stormlight 5 and 6 would be a good time for something like this, and it sounds like they're starting to develop some plans so that they can make that happen. Brandon went on to describe THREE different styles of art book that they are exploring. These include (1) a book focusing entirely on artwork, including concept art, (2) an illustrated "guidebook to the world", with a balance of art and text, and (3) a companion encyclopedia with more text and less art.

The video concluded with an invitation to vote on which of these options you prefer! The poll includes two questions, and you can find it here. (though I'd recommend listening to Brandon's description of the options first!)

And because my joke at the beginning of this article wasn't true enough, we've got one final news item that came out in the time it took me to type this up!

The playing cards are here! The Stormlight-themed playing cards were the final product included in the swag bundles, which means shipping begins today! It looks like the 2020 Tier 6 backers can expect their bundles first, with everyone else to follow in the coming weeks. The goal is to have all swag shipments out by mid-July.

There's been a one-month delay on 2021 Way of Kings leatherbounds, but they still hope to have them all out by the end of August.