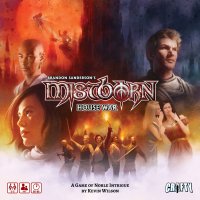 Last August we ran an article covering the Mistborn related showings Crafty Games had at GenCon, most notably the board game they had been working on. Now they are ready to Kickstart it. The campaign officially launches next Wednesday, June 15th, but they have posted a draft giving us a sneak peak.

The basics of the campaign are this: they are asking for $30,000 and the minimum pledge to get a copy of the game is $50.

There is a lot more to look through on the campaign page draft, which I encourage everyone to go check out. There's a video that covers the basic mechanics of the game. There is a list of fourteen planned stretch goals, which includes more Noble houses to play as. You can also see some of the art from the game, from quite a few different artists.

One thing that did catch my eye is under the pledge Add-ons. Each of the books for the Mistborn Adventure game are available to add on, along with sets of Mistborn Dice. They also tease however the follow up to the Alloy of Law supplement dealing with everything that was revealed in Shadows of Self and The Bands of Mourning!

Also if you do plan on backing the Kickstarter I would strongly recommend signing up for the Crafty Games Newsletter as any subscribers who back will receive a free malatium die! This is not one of the symbols in the retail set, and has not been available in any other way until now..