We reported on this last week, but now we have concrete details of Lux: A Texas Reckoners Novel. This is a project by Brandon's audiobook company, Mainframe, and is an Audible exclusive set in the Reckoners universe (which includes Steelheart, Firefight, and Calamity), coming out July 22nd. We also have a cover reveal, as well as the first chapter of it! There's also a sale on it on Audible for 49% off, if you are an Audible member already, which ends tomorrow, 6/25, at 11:59pm Pacific.

If you're unfamiliar, Brandon spoke about new Reckoners content back in State of the Sanderson 2020, saying:

"To that end, we’ve developed three novellas (cowritten with the talented Steve Bohls)—Author of the middle grade book Jed and the Junkyard War (which has fantastic worldbuilding)—following a new group of Reckoners in the same universe. The novellas start around the time of the end of the original trilogy, then go past them into the future of the series. They can be seen as three “episodes” of a television show, or read together as a single novel, since they are all told from the same character’s viewpoint."

Interestingly, Lux is not listed as a novella, but rather a "novel," so it's unclear if this is the first in the sequence, or all the novellas were combined into this. I suspect that since it has the "A Texas Reckoners Novel" subtitle that this novel won't be the only thing we see from this group of characters.

Here is the cover: 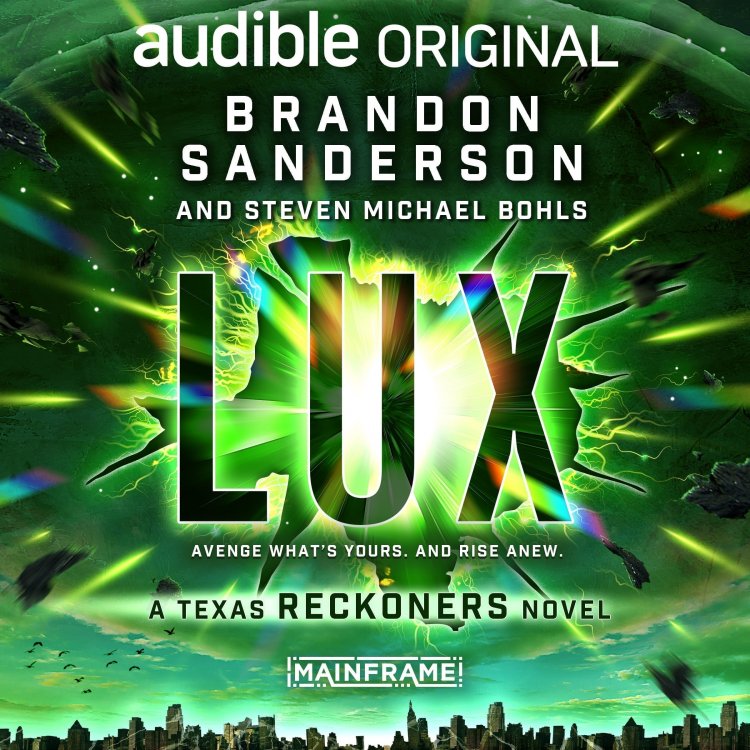 On Amazon's store page, they have a blurb for this novel:

A new team of Reckoners must infiltrate the flying city of Lux to take down the Epic Lifeforce in this audio-exclusive novel from Brandon Sanderson, the best-selling author of the "Stormlight Archive" and "Mistborn" series, and co-author Steven Michael Bohls.

When the great red star Calamity appeared in the sky, some believed the end had come. They were right.

Jax has learned all of this the hard way. Orphaned at an early age, he's spent most of his childhood training to be a Reckoner - determined to find the Epics' weaknesses, unlock their secrets, and protect those of us who are still left.

But now, the mysterious High Epic Lifeforce has arrived with his flying city, Lux, to plunder what's left of Texas. So Jax and his ragtag team - the few who remain of the once-mighty Texas Reckoners - must take their battle to this floating fortress of riches - and defeat the invincible.

To avenge what has been lost. And rise anew.

I'm a bit surprised that Lux isn't the name of an Epic, but rather a city, but it seems kind of cool for sure.

Here's the first chapter, which Brandon posted on his YouTube:

Peter Ahlstrom replied on Twitter that a print version is likely to happen eventually, which I'm glad to hear, since I have difficulty processing audiobooks. However, note that the first Mainframe audio original, The Original, which came out last year, is still audio-only, so if you want a print version, you may be waiting quite some time for that.