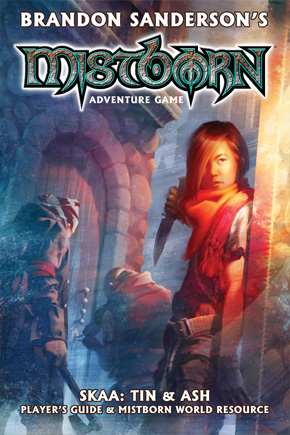 Tor.com posted another new preview from The Bands of Mourning this morning. Check it out here! It picks up soon after the end of the first chapter and has a couple really great conversations between Wax and Steris and Marasi and Wayne respectively. Not to mention I think the hardcore cosmere-enthusiasts among us will be very excited by the last sentence...

In other news Crafty Games has released the newest supplement for the Mistborn Adventure Game, Skaa: Tin & Ash. It has been up for pre-order and digital delivery for a couple weeks but the physical copies just arrived in their warehouse the end of last week. They should be starting to send out orders today, just in time for Christmas! I've only been able to read parts of it so far, but it looks like there is a lot of really interesting information in it. It also has another beautiful cover by Tommy Arnold (who did the cover art for Terris: Wrought of Copper).

Another exciting thing they are doing is that they made a batch of dice with the Steel alphabet symbol for aluminum (a metal that is /not/ included in the dice set they sell or the kickstarter exclusives) and since Nov 18th and while supplies last they will be including one, for free, in every physical order made through their website.

For those of you wondering about what is going on the with the Mistborn board game, the kickstarter, which was originally supposed to take place in October/November, was pushed back out of deference to Team Sanderson and an effort to give the project some breathing room. It is currently planned to launch during Quarter 1 of 2016, possibly late January/early February. The game has also undergone a name change, instead of "Final Empire: A Mistborn board game" it will be titled "Mistborn: House War".