One Year of Art Commissions 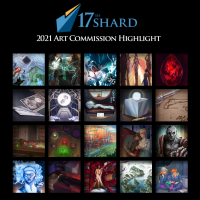 Hello, hello, and welcome to this a bit of a... retrospective kind of post. A few months ago we passed an important milestone - one year of monthly art commissions - and we wanted to take a moment and talk about all this, but also showcase everything we've commissioned (in the first year; we've got a few more since then). So take a seat, make yourselves comfortable, maybe pour a drink, and enjoy a brief lookback at some pretty things we manifested into the world by channeling the support of our patrons (of which if you are one, thank you!).
Be wary of spoilers! Also, note that many of the links here lead to either our Patreon page (where you might need to be a patron to see them), or the Coppermind. Just a heads up.
If you prefer to read this with alt text, this post is mirrored on our Patreon, and it includes image descriptions.
February 2021 (poll post | art post)
We first hit our art goal back in January of 2021, which means that our very first art poll dropped in February that year. Hot off the Rhythm of War release just a few months earlier, Lasting Integrity crushed the other contenders with a whopping 41% of all votes. We decided to work with Connor Chamberlain, whose work graces many a wiki page, and he did an amazing job capturing the mindbending structure of the honorspren city. 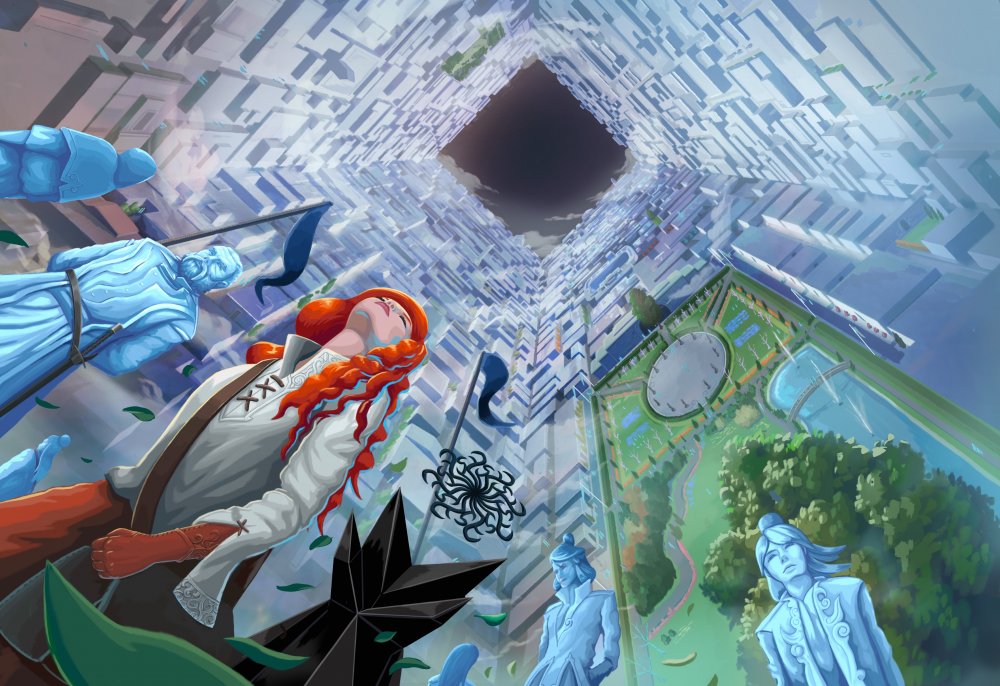 March 2021 (poll post | art post)
Rhythm of War stayed strong in the month of March, with the nearly fatal encounter between Kaladin and Moash during the Hearthstone extraction winning with a full third of all votes. Artist rspixart had been doing the rounds recently, with some excellent Rlain and Renarin pieces, and we decided to hire them for this one. The depiction deviates from the canon a little bit, but Kaladin should really know better than to pick fights in dark basements that lack proper dramatic lighting. 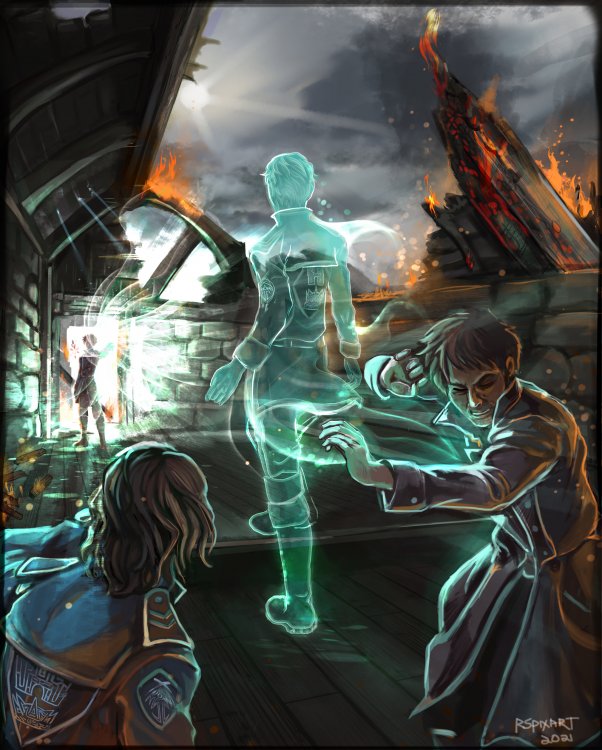 April 2021 (poll post | art post)
Surprisingly, it was an Elantris piece that won the month of April - the climactic scene of the book where Raoden, soon after fixing the city of Elantris and all the Elantrians, saves his friends from the Dakhor monks. Now, if you are familiar with the Cosmere art scene, you'll likely be familiar with Shuravf, an artist as prolific as she is talented. So we had been itching to get a piece by her, but all of our winners so far had been from Rhythm of War, and she hadn't read the book... but Elantris, Elantris was fair game! 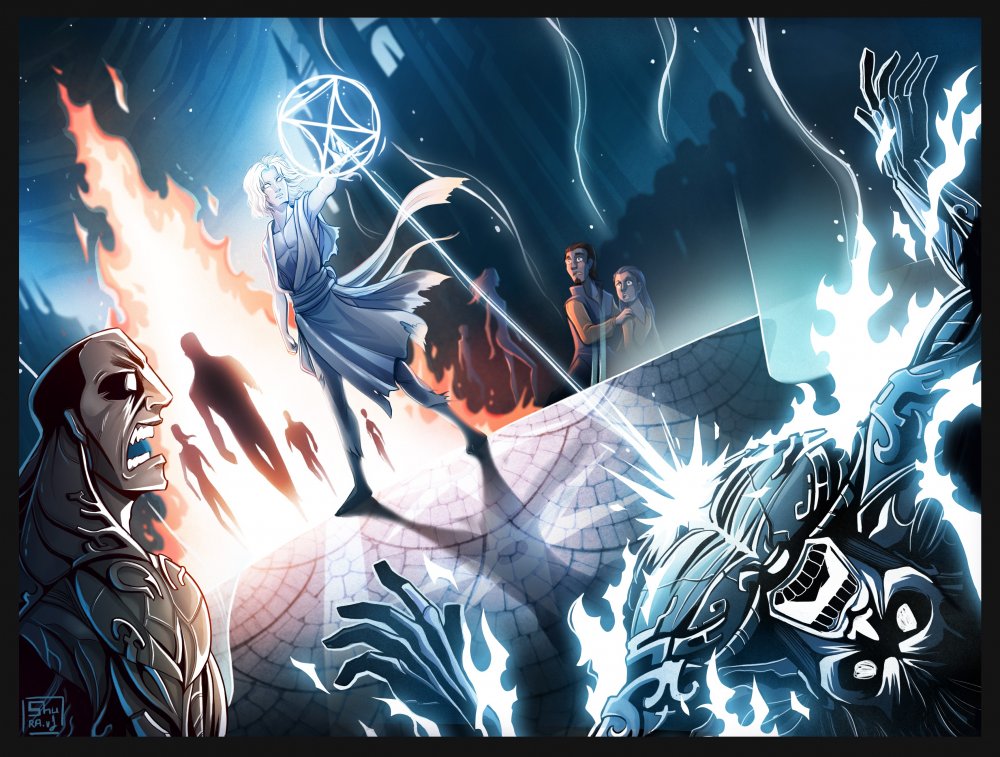 May 2021 (poll post | art post)
Okay, there's a bit of a story here. The runner-up from the past two months, the Nine, finally won a round, and we approached Katie Payne to take a stab at it. And stab she did. Our plan was to really cut corners with the character design and encase the Fused almost entirely in their stone pillars - because an illustration with nine unique characters is quite pricey even if we are not working with an artist of Katie's caliber. Instead of doing that, however, she wanted to give them all unique designs, which made this commission an order of magnitude more complex (and cool). As the weeks and months slipped by (because we don't really give deadlines for these), it became clear that we are not commissioning this (because we could never afford it), we are just providing a little bit of art direction for a piece that had become Katie's personal project for just about a year. If you have an Instagram account you can see her progress in this set of stories (including a very important poll about whether to give one of the Nine a goatee). So, sorry this one took a bit longer, but also not sorry, because it's been 300% worth it 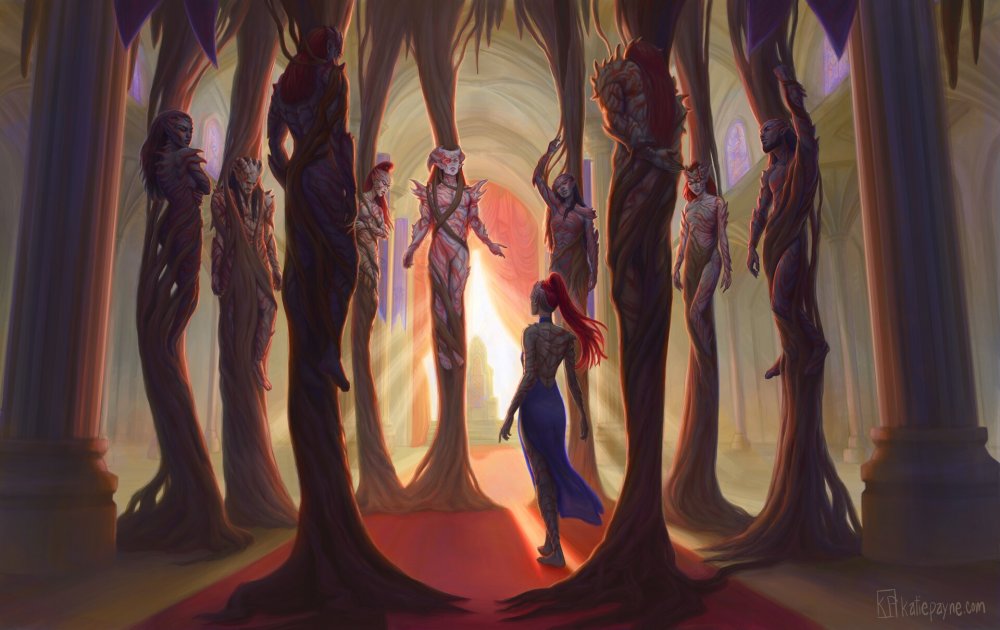 June 2021 (poll post | art post 1 - 2 - 3 - 4 - 5 - 6)
Going into June, we already knew that May's piece was going to take a little while, so we wanted to do something simpler, faster. Instead of one piece, we decided to do a series of smaller commissions, focus on some iconic objects from within the Cosmere, and give ourselves an excuse to work with some artists who don't often have time for our standard, more complex commissions. The list ended up including Nozomi Matsuoka, paintweaver, Shuravf (again; we really like her work, okay?), Botanica Xu, Connor Chamberlain (again), and Eli Gardor. 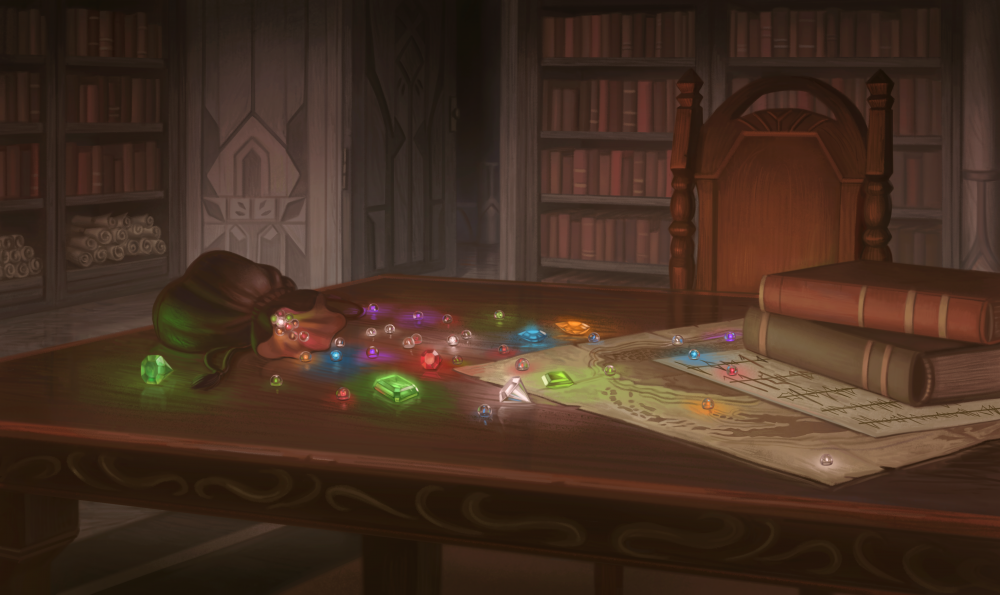 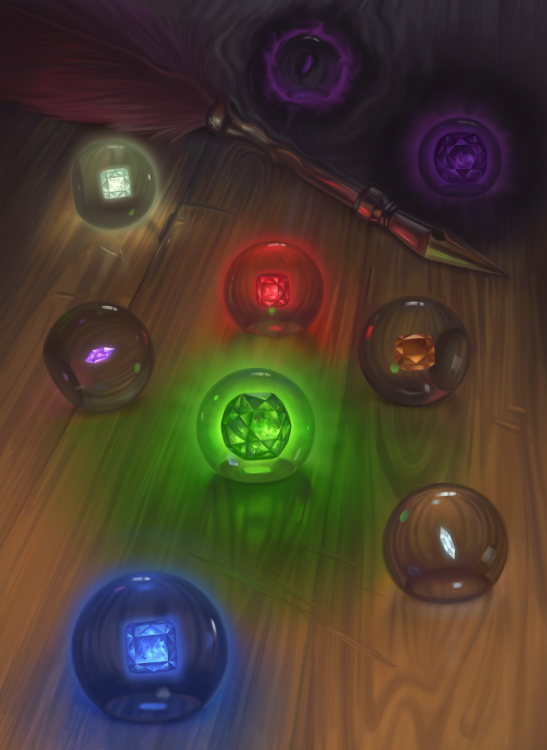 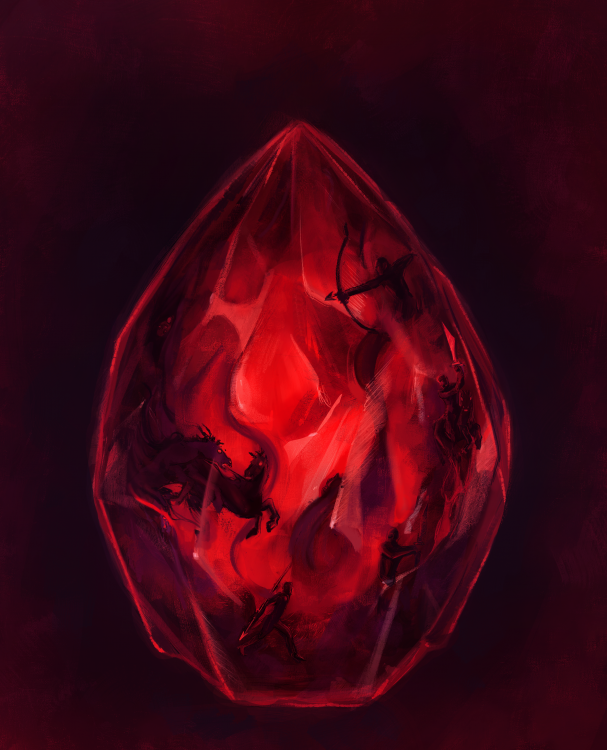 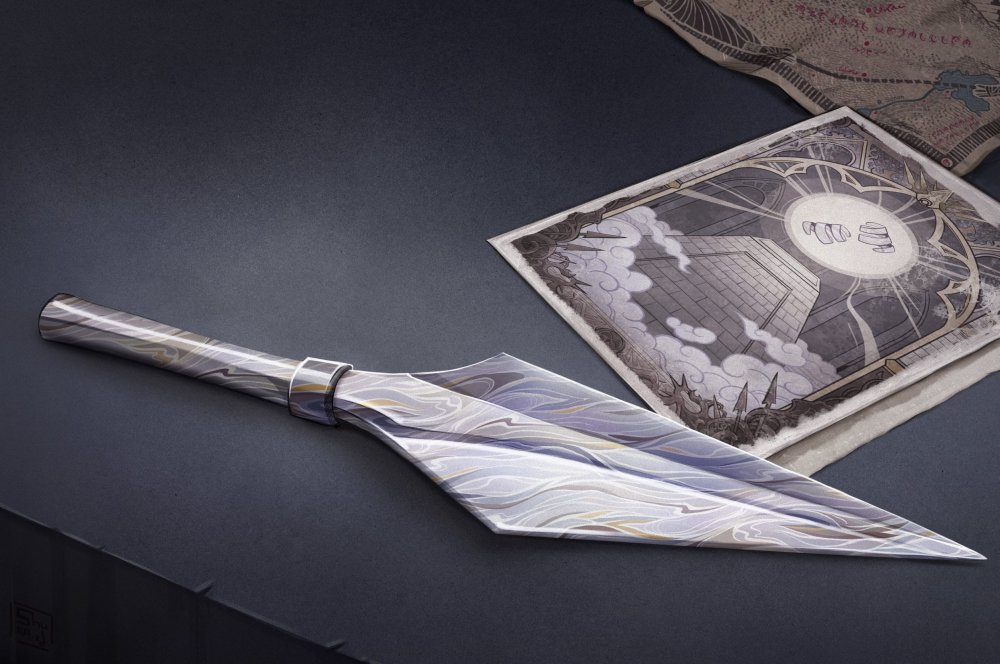 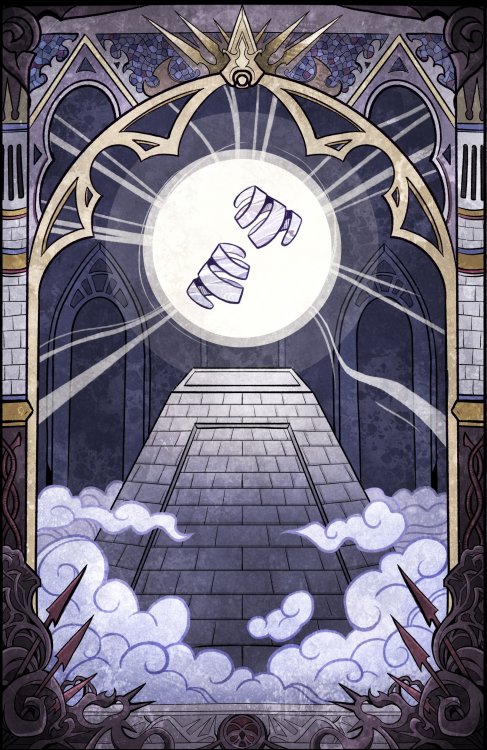 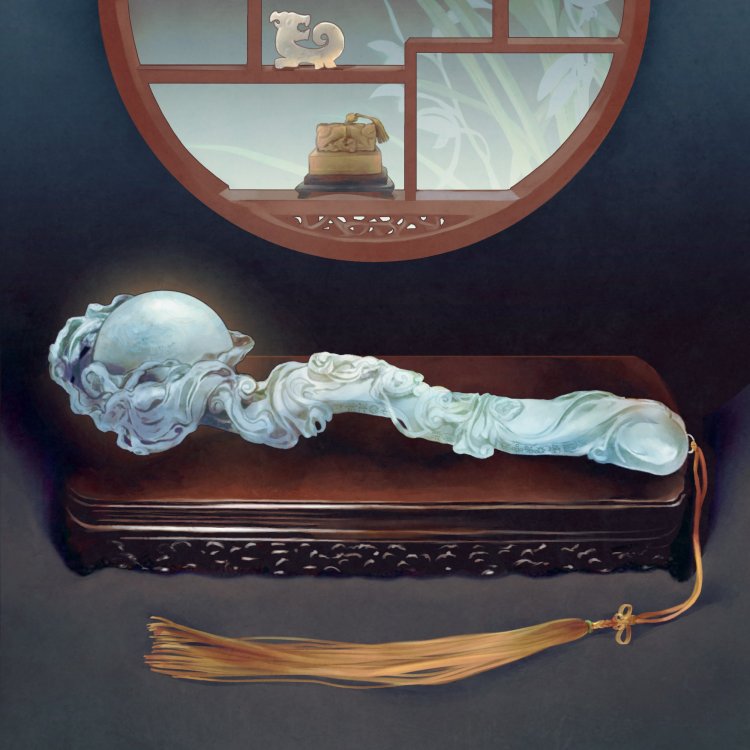 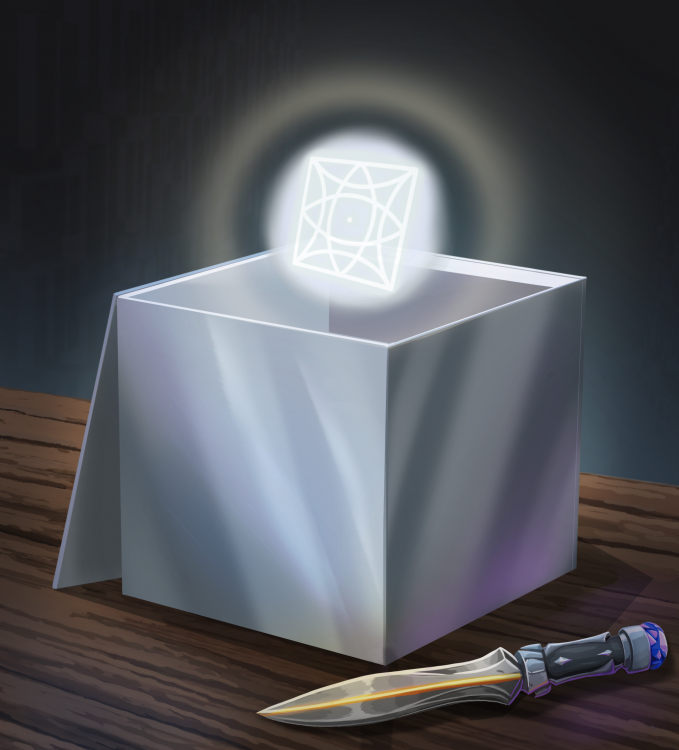 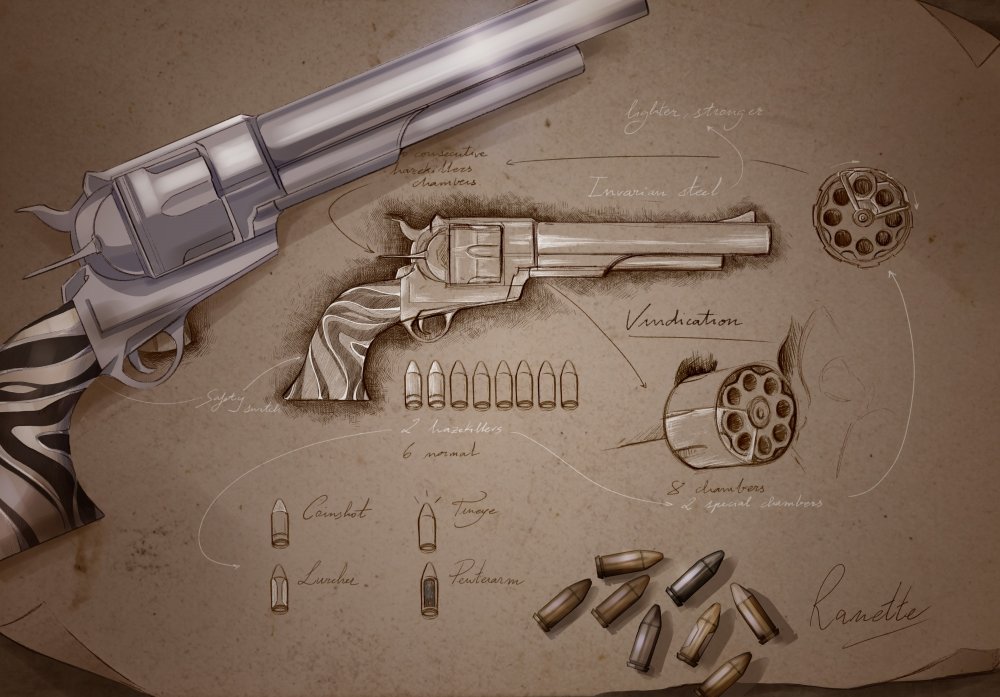 July 2021 (poll post | art post)
It was around July that we realized we liked the idea of giving each month some theme, even if it's a loose one. It's not necessarily something we've formalized as a rule, but it helps us come up with ideas. So for this month, we wanted to do an environment piece - and New Seran was the winner. Artist Lyraina had done some absolutely unbelievable Mistborn pieces (just look at them!), and we knew we wanted this kind of talent. If our schedules align, New Seran is no the last you'll see from her! 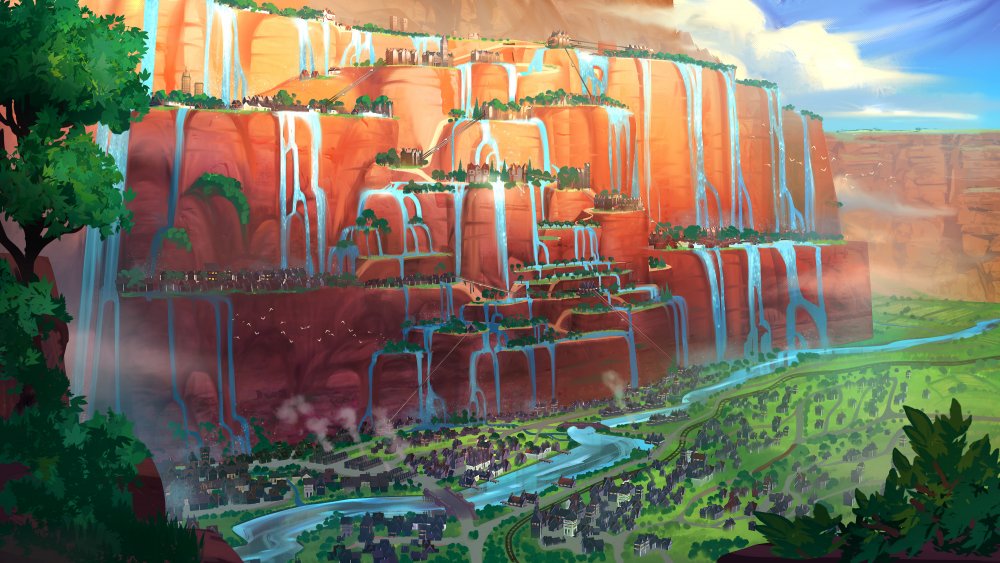 August 2021 (poll post | art post)
We were extremely happy with Eli Gardor's work on Vindication's design from the set of June commissions, so we knew we had to bring her back for something more visually interesting... and the ending of Shadows of Self, with Steris consoling Wax after Lessie's (second) death, was just what we needed. Fun fact, this was one of our closest polls, Wax and Steris winning over Teft and Phendorana with just a single vote. 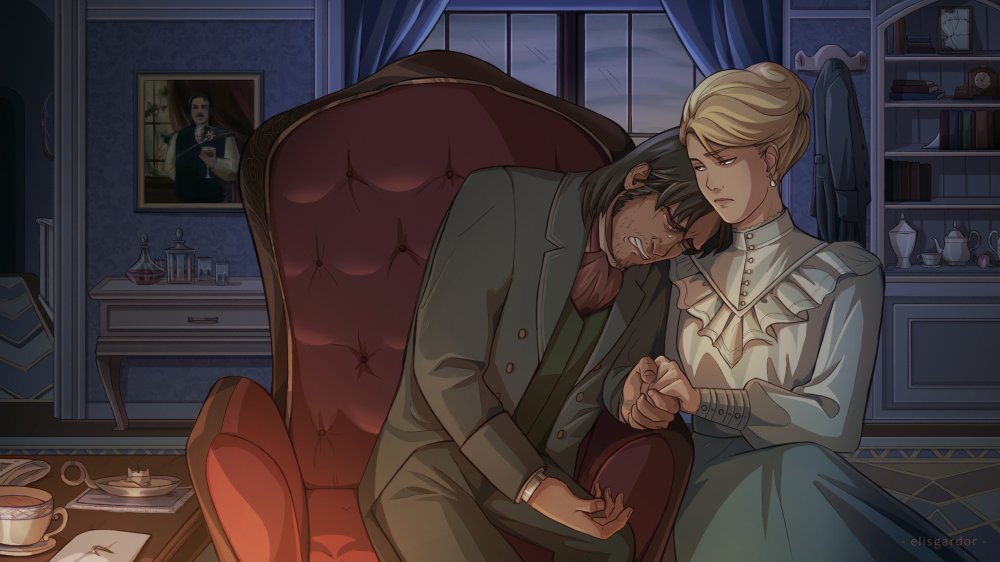 September 2021 (poll post | art post 1 - 2)
We didn't have a strong theme for September, nothing like the quality bonding moments of August, but most of our options could get shoehorned into a kind of "these characters are meeting for the first time, or maybe see/reveal their true selves for the first time" theme, so that's kind of what we went with. Nikli, after coming up second in our very first poll, finally won, and we brought Shuravf back because she had some interesting ideas. But surprise! We had some leftover money, so we had her do a Phendorana portrait as well. Everyone's a winner! 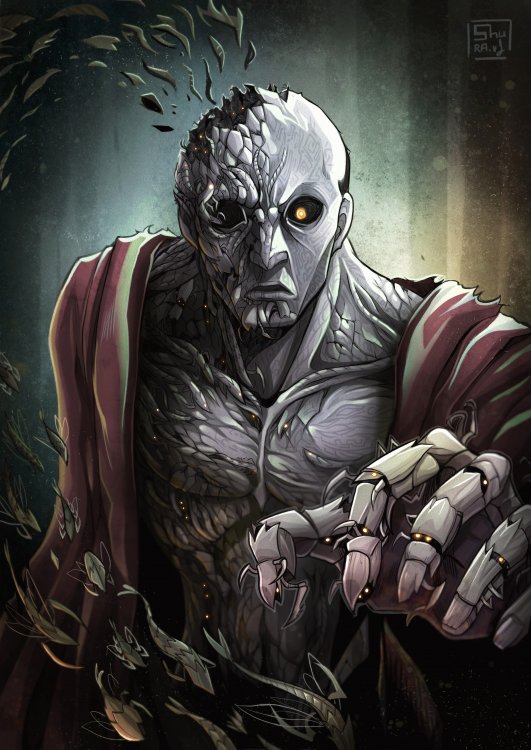 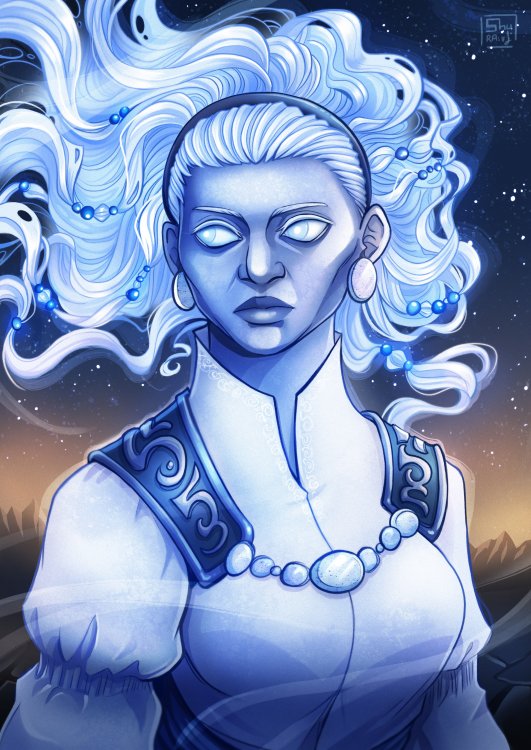 October 2021 (poll post | art post)
October is traditionally the spooky month of the year, what with Halloween and all that, so we thought it'd be fun to do some spooky options. Ishar's little tent of horrors won pretty easily, and fortunately the month lined up nicely with Nozomi Matsouka's commissions opening up. She is usually only available for work a few times each year, so we jumped on the opportunity, and she absolutely killed this piece. She pulled it straight from our minds, from our cognitive realm, if you will, and manifested it into the physical. 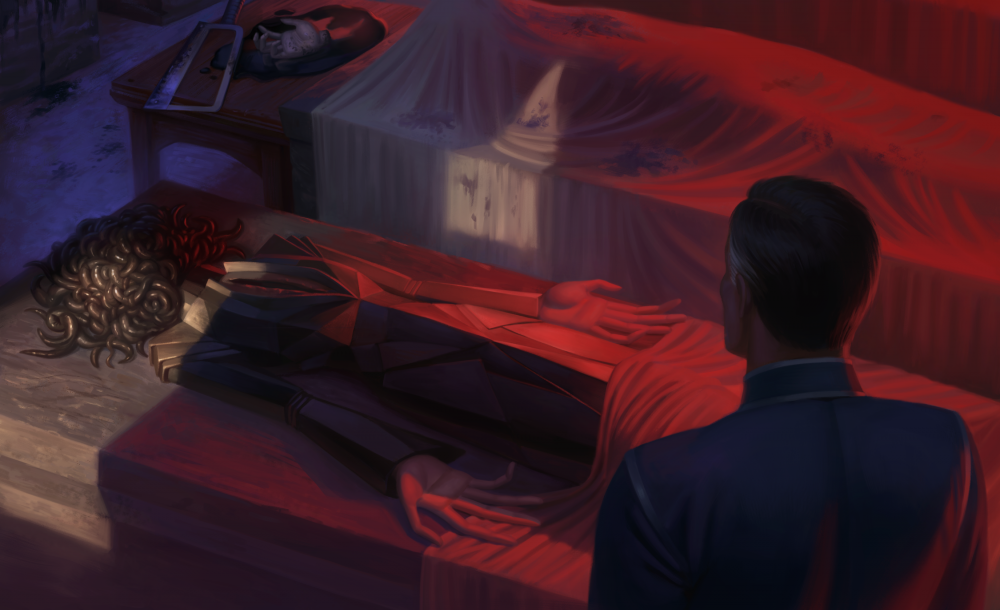 November 2021 (poll post | art post)
Coming out of Spooktober, we had the opportunity to work Caio Santos - another one of those artists who are available for work on a handful of times each year - and being familiar with their portfolio, we wanted something epic. So that's what we did. We lined up some big climactic moments, and our patrons picked the Warbreaker scene where Susebron saves Siri from Bluefingers and his Lifeless. Of course, our secret plan was to bring more sexy Returned art into the world, and Santos definitely understood the assignment.

December 2021 (poll post | art post)
December gave us another opportunity to work with an artist we had been itching to hire - Heather, better known as betweenskyandsea on our Discord, or Heatherly on Instagram. She had been working on some environment studies lately, and we wanted to give her an opportunity to explore some ideas while also getting paid. So we picked some locales, and our patrons picked the Pantheon archipelago (an option we were secretly hoping would win anyway). Needless to say, Heather killed it, and we can't wait to find another excuse to work with her! 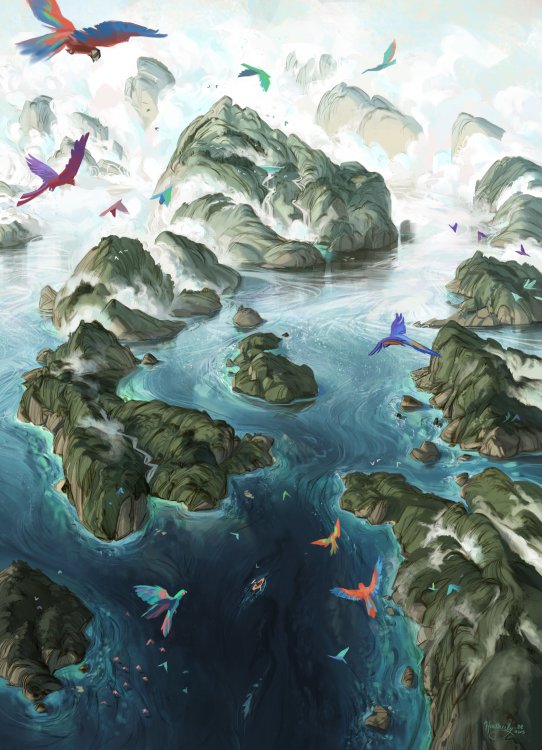 January 2022 (poll post | art post)
Which all brings us into 2022, and the last of our (first) 12 monthly commissions. We had known that the end of 2021 would bring us a lot of new Cytoverse stories, so we started chatting with Jill Andersen, a brilliant artist with a lot of fantastic Skyward (and Starsight) illustrations; we had to have her do a piece for us, and with all these Cytoverse books, we wanted to dedicate a month to just that (because, let's be honest with each other, Cosmere options will usually beat non-Cosmere ones). One poll later, and we had our winner - FM and Rig, the cutest and newest ship to sail? fly? the Cytoverse. Plus some slugs, for good measure. 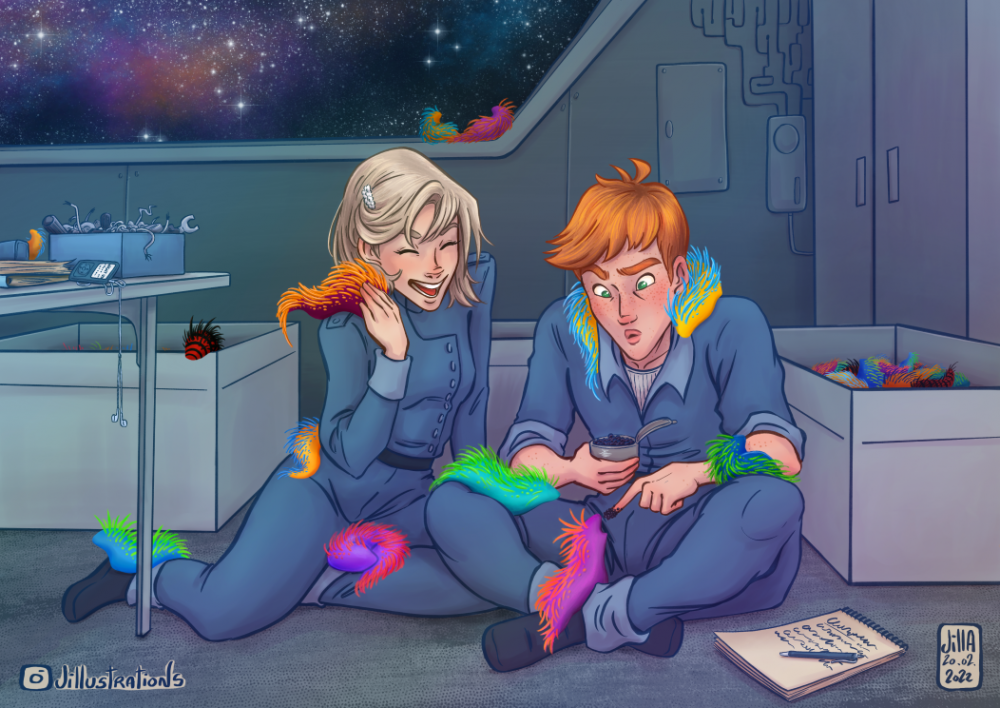 The End
And that's it. Twenty excellent (in our humble opinion) illustrations, over 12 months, none of which would've seen the light of day without the continued support of our patrons. If you are one of the people who has helped us make all of this a reality, thank you, and there's a lot more where all of that came from. If you are not, thank you too, for making it this far into this slightly rambly post; maybe consider joining in?

Of course, none of these would've seen the light of day without the incredibly talented artists we hired throughout the year. Every single one of them was great to work with, and every single one of them exceeded our expectations. They all deserve your love, so find them (online!) and give it to them.
At the time of writing of this post, we are mere dollars away from our $1,250 goal, which will double our monthly art budget, allowing us to commission even more art from even more artists, so we are all very much looking forward to that. But until then, we are still churning things out every month, and have no plans to stop, so here's to another year of wonderful art for all of us!