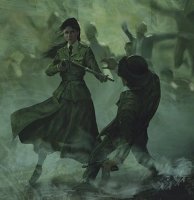 Hey all, Windrunner here with another news update post. Today we have the exciting announcement that Brandon has finished the first draft of The Lost Metal, the forthcoming final book in Era Two of Mistborn. Brandon's been at it for most of the summer and wrapped up the writing late last night, only a few days behind schedule for his target of the start of August (not that we're complaining). The word count of this draft is ~149,000 words, making it about 50% longer than the previous books in Era Two, which were all about 100K in length. This word count is obviously subject to change, the book still has revisions to go through before it will be in its final form. Before you get too excited, remember that this book's expected publication date is November 2022, so fans still have a little more waiting to do before they get their hands on this conclusion.

Brandon hopes to launch into the second draft on Friday with the goal of cleaning it up and revising it before sending it off to his editor and beta readers for feedback. He hopes to have this draft done by mid-September Once he has those reactions in hand, he plans working through two more drafts, one to include this new feedback and a final draft to polish the whole book up, with the goal of turning it in by summer next year. While this isn't Brandon's normal breakneck release schedule, he is intentionally trying to give his team a little extra lead time on books going forward, as it is such a challenge to rush to release a book only a few months after it has been written. While these revisions are ongoing, Brandon now intends to turn his attention to writing Skyward 4 (tentatively entitled Defiant) for the rest of the year, with the goal of starting writing on Stormlight 5 at the start of 2022 (and fitting in the Rock novella Horneater somewhere in there to boot).

In terms of other new details, Brandon's writing sprint last night was working on what he has called an "extra beefy" epilogue, writing the final three scenes of the book. Since this is the ending of this arc of the Mistborn series, he wants to give a little more time to the characters and setting since we will again be jumping forward in time on Scadrial for the eventual Era 3 series. This book also includes seven or eight Steris viewpoints, which if you're a Steris fan like me, is a big step up from the previous books. For those of you who enjoyed the "shameful ribbon" tease for RoW, Brandon's context-less spoiler for The Lost Metal is that there is a minor plot point involving a desiccated frog. So now that we have that major reveal in hand, and now have various sundry theories about Adonalsium being a spiked frog, feel free to head over to our Discord channel or the forums and to chat with us and speculate about The Lost Metal and future cosmere releases!

(Article image from Marc Simonetti's The Bands of Mourning cover from Brazil, published by Leya)