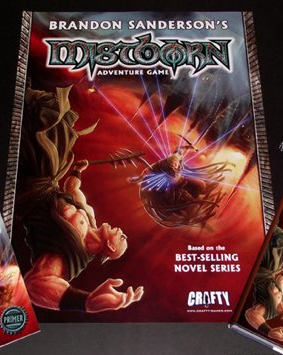 Wow, there's been a lot of updates! I apologize for not being on the ball here. Of most time critical importance is the sexy Mistborn Adventure Game Sweepstakes from Tor.com. It has a deluxe hardcover of the Mistborn Game, an audio edition of The Way of Kings, and probably most exciting for all of you, an ARC (Advance Reader's Copy) of The Alloy of Law. Enter in the comments there to win. But! The deadline is September 6th (tomorrow!) at 12pm Eastern time. Hurry your butts!

(Also interesting in that thread is that there will be a special Alloy of Law supplement for the Mistborn Adventure Game. Not entirely unexpected, but I had not heard of that before)

There's another giveaway on Goodreads for ten copies of Alloy of Law. There's 31 days left on that contest, so there's plenty of time, but realize that there's 1198 people requesting so far. Pretty still competition, but it would be awesome if you could get a copy, regardless!

Oh boy, can you believe there's even more news? Michael Whelan has won a Chelsey award for his fantastic work on the cover of The Way of Kings. Congratulations, Mr. Whelan. He posted some kind words in the comments to that Tor.com post:

Wow! Thanks to Irene and Brandon for giving me the honor of taking on such a cool project. One could not help but be inspired by such a masterpiece of fantasy.

Next up, Brandon has done a Q&A on Reddit, with a metric ton of information being revealed. There's Wheel of Time stuff, cosmere stuff, and general comments all around. We've compiled almost all of the answers in this thread.

Oh, and remember the Mistborn video game? It happens closer to the founding of the Final Empire.

There are some important ramifications for theorizers, too. Tt's confirmed where Bavadin is located: it's Taldain, the planet of White Sand. It's an unpublished cosmere trilogy. Second, the [REDACTED], er, I mean, the Hero of Ages, let's say to avoid spoilers, is heavily implied to not be the Seventeenth Shard. There's also an explanation for why Allomancy does dramatic effects while still being of Preservation, and it was described essentially like the Principle of Intent describes. This makes me giddy like a schoolgirl.

Best exchange in the whole Q&A:

Yserbius: WHO IS HOID?

Brandon: A character from my books. (/trollface)

For you ebook readers, interior artwork for The Way of Kings has been posted. It's beautiful stuff. We have a discussion thread discussing some of the finer details of the interior art here.

Now for some 17th Shard site stuff. The old archive of TWG's forums is now online at twg.17thshard.com. It should be a read-only archive, so you shouldn't be able to post (let me know if I screwed that up), but you're able to log in and everything. I updated TWG to the newest version of SMF, making it much more secure as well. But, short version, all the data is there.

Lastly, 17S has had some strange errors. They have, at least for me, vanished, but let me know if those appear again.

One thing you need to know, especially newer members, is that our server hosting kind of sucks. I plan to make a big post about errors that you should know about, but not be too worked up about. These include 508, 504, 502, and other errors like that. Those appear with a white screen with some simple text. If the error message looks like the site itself (or with a grey bar at the top, blaming the databases), then you should email me (erc [AT] 17thshard.com) immediately.

For mysterious reasons, the server is prone to going down at 8pm to 9pm Mountain Time. No, I don't know why it happens, and I'm immensely sorry for it. If you happen to love servers and maybe know a reason why this happens, shoot me an email. It involves entry processes (PHP, cgi scripts) spiking, and then the host restricts our usage, thus breaking the site. There's no reason or indication entry processes should spike at that time, however.