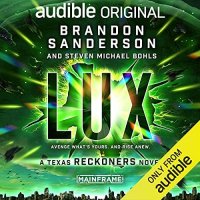 There’s been quite a bit of movement in Brandon’s upcoming works recently, so get ready for some new content.

First, Lux: A Texas Reckoners Novel, will be releasing this Thursday, July 22. The story was written with  Steven Michael Bohls and will be an Audible Original on Amazon upon release. Brandon has stated that Lux will eventually be released in print and ebook, but not for at least a year after release. The first four sample chapters have all been released to listen to on Brandon’s YouTube channel. Brandon will be doing a livestream with co-author Steven Bohls tomorrow at 6:00 PM MST.

Brandon’s main writing project, Wax & Wayne 4, tentatively titled The Lost Metal, has hit 75% completition on the first draft. Brandon is working his way through part 3 which he is writing by character. The part will have the characters split into three different groups. One character will be by themself, two characters will be together, and Steris will be by herself with a small number of viewpoints. At JordanCon, Brandon did a reading from the prologue of Wax & Wayne 4. The prologue is of a young Wayne whose mother tells him a story about Allomancer Jak. The recording can be found online here and the transcription can be read on Arcanum.

JordanCon also had multiple signing lines and a Q&A session. The WoBs are currently being transcribed on Arcanum and can be read here for all that juicy new info.

Lastly, we have official confirmation that Dark One Volume 2 is underway. So all you fans of Volume 1 have something to look forward to, though detail of when it will be released are yet to be announced.