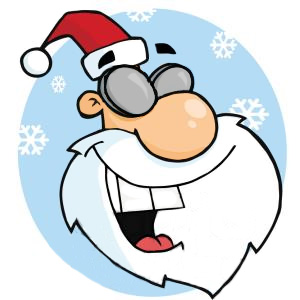 Hohoho, Sharders. I am Inquisitor Santa, and I'm pleased to be allowed to finally write for this site. Just because I slaughtered that barge full of orphans, the administrators think that's "too violent"? Lord Ruler, what a bunch of losers.

Bah. You worldhoppers. I've heard about the legend of your "Santa Claus," and there's not one mention of his obsidian axes. Miserable cretin. I live in the north pole of Scadrial (technically), and you know what I do when I check my Naughty-and-Nice list, I don't give the naughty half-breed children a pile of coal. Though my axe is dark like coal, I suppose.

In any case, I'm here to give you people on the Nice list a few special things: spikes through the eyes. Spikes made of fancy prizes! Unless you're a skaa half-breed, in which case, register in the contest anyways so I can hunt you abominations down! Kill, kill! FEEL THE WRATH OF THE LORD RULER!

Where was I? Oh, yes, prizes. We have eight spikes--I mean, prizes:

-A signed, numbered copy of The Alloy of Law. I'm being informed that this is in fact #781.

-The Mistborn Adventure Game by Crafty_Games. This tabletop RPG game is set during the Final Empire, so I immediately praise these "Crafty Games" people for their obedience to the Lord Ruler. The RPG also has a short story by Brandon Sanderson himself, as well as some annotations on the creation of it. The game comes out December 15th, and if you win this prize, you'll get a digital copy of the book that day, and a softcover copy when it gets back from the printer. I hear the game is pretty fun. Of course, if you don't go play an Inquisitor, I will go down your chimney and chop your head off.

-A paperback of The Way of Kings. Even as a paperback, it makes an excellent bludgeoning instrument. I give it four out of four bloody obsidian axes for its versatility. It's a good book too, I suppose, but if you aren't killing skaa I don't see much point.

-A Mistborn trilogy box set. Maybe you people think it's popular, but this is a package of heinous heresies against the Lord Ruler. Just know that I'm always watching you...

-A Warbreaker paperback. Too colorful, not enough ash. I like the sword, though.

-A signed copy of Elantris. It's in great condition, not even a drop of blood on any of the pages. Which is a rather bizarre cultural taste of Earth's...

-A full set of the cosmere: Elantris, the Mistborn Trilogy, Warbreaker, and the Way of Kings. I decided not to include Alloy of Law because it is full of even more traitorous lies!

Alcatraz Smedry! Feel the wrath of the Lord Ruler! Wait what are you--

OW LORD RULER HE BROKE MY EYE-SPIKE! WHO EVEN DOES THAT THAT ISN'T EVEN RIGHT!

What? I'm being informed I can't send a bloody axe through the postal system. Your governments are an abomination to the Lord Ruler. I'm going back to Scadrial to kill some half-breeds now. Bye.

*Void where prohibited, which is pretty much everywhere except Final Empire, since, uh, it's illegal to stab people's skulls with huge metal spikes. Or anywhere else on the body, for that matter.

**You aren't going to be stabbed. Really.

***We're kidding about the void thing. We'll send the prizes everywhere, even internationally!

To enter, just comment below, and you'll get a chance to win any one of these great prizes. Double entries are not permitted. The contest will end Tuesday, December 6th at noon MST. We hope to get prizes out as soon as possible, before Christmas (Amazon Prime should help with that!) but we should warn you that, if you are international, they may not come in time. We will see when we get there.

Happy holidays, and remember to not kiss under the giant steel spike over your head. That'd just be irresponsible.