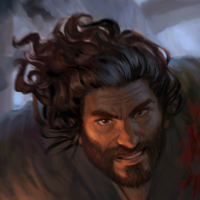 It's been but mere two weeks since our last commission came in, and we've already got another one for you! This is the last piece we were waiting on to wrap up our backlog, and it's the February one - Vasher.

We decided to work with Esther Schrader, also known as Zirael, whose work you might recognize from the Kaladin album illustrations as well as a vast swath of (mostly) Stormlight portraits (like this Ash). Their style is very recognizable, and the things they paint are very versatile. They are certainly a staple in the Cosmere art scene, and we had been looking for a subject they can really do justice, and the dynamic nature we wanted for this commission was an excellent candidate! We couldn't be happier with everyone's favorite murderhobo and his cheerful murdersword of death, and we hope you like it too!

Aaand here he is! This scene heavily inspired by Warbreaker chapter 56, where Vasher escapes from Denth and goes running throughout the palace, turning walls, floors, ceilings, furniture, and enemy Lifeless to smoke as Nightblood gleefully feasts on his Breaths. We took some artistic liberties (e.g. the wall behind Vasher should all turn to smoke instantly, but having the smoke consume it from the middle just looks cooler), but the piece is a total banger. 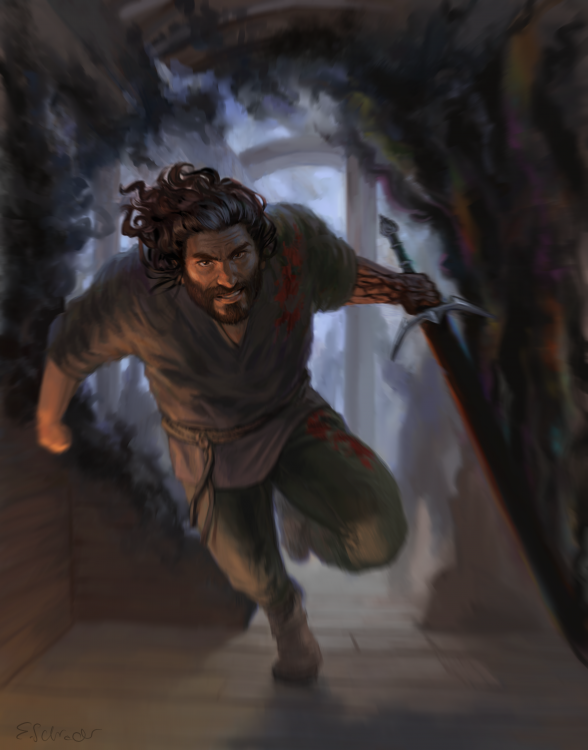