How in the bloody world did she do that? A biological look at blood Soulcasting

A long, long time ago, in a galaxy far away, it was pointed out on Shardcast that I am rather bothered by the mechanics of blood Soulcasting. Or more specifically, how it is used to save Shallan’s life during The Way of Kings. I have a background in molecular biology and have spent several years working with blood products, so to have some fun, I decided to put my nerd cap on and combine two of my passions.

I would first like to preface this article to say that Brandon has been clear in the fact that he has limited knowledge of blood. The way he uses blood Soulcasting in WoK, for all intents and purposes, is perfectly fine for a book not about blood transfusions. I find for me personally, the scene in the hospital pulls me out of the story, but it shouldn’t be expected (and I certainly don’t expect it) of Brandon to write something supremely in depth and medically accurate. The basics will do. Besides there is an answer as to why this works and the answer is spiritual mumbo jumbo.

After Shallan is poisoned by Kabsal, Jasnah saves her life by Soulcasting Shallan’s blood to remove the poison. In doing so, Jasnah is introducing new blood into Shallan’s body (in essence, providing a blood transfusion) that does not match Shallan’s system. This was a risky choice by Jasnah, not just because of the dangers posed by Soulcasting, but also by the dangers associated with mismatched blood transfusions. The probability of Jasnah getting the make up of Shallan’s blood correct and causing no reaction is very small.

Blood is complex. Although we think of it as a homologous unit, it is made up of different parts, each of which perform different functions in the body. As well as this, the type of blood we have can be vastly different from person to person and if the wrong type of blood is given to someone they could have a severe reaction, or in the worst case, die.

It is unclear what the exact nature of blood types is on Roshar, though I’m going to take the ‘eight types’ spoken of by Jasnah to be the eight major blood types in real life; O+, O-, A+, A-, B+, B-, AB+, AB-. Brandon has confirmed the existence of Rhesus factor (Rh) (which is denoted by the +/- on blood typing). Knowing that Rh exists in Stormlight, it’s logical to expand that the other main blood types also exist. Roshar has some knowledge of blood typing, although it is not extensive of modern day typing.

Blood Grouping
The two most commonly known groups, as well as the major groups when considering transfusion, are the ABO and Rh groups (+/-). Your ABO is particularly important when being given someone else’s blood; if you are given the wrong ABO group it can lead to a rejection of the donated blood by your immune system. When transfusing blood your ABO group is of utmost importance, however, it is not the only blood group that needs to be considered.

Currently, there are 34 known blood group systems, comprising of over 300 molecules that could be found on the surface of your blood cells. Most of these systems give rise to rare blood types, where you either have a molecule that most people do not, or vice versa. While the specifics of each of these minor systems are not important, the variety of combinations that they give rise to creates problems when giving blood from one person to another. Except in life threatening situations, patients will almost always be checked before being given blood to minimise the risk of reaction.

Most people when they think of universal donors think of O- blood. Indeed it is; but only in the case of red blood cells. Blood is not one substance, it is a mixture of different cells. ABO receptors can be found on red blood cells, while antibodies are found in blood plasma. ABO is less important for another component of blood, platelets, however, in this case HLA receptors need to be considered. HLA is also a factor for a fourth component of blood, white blood cells. 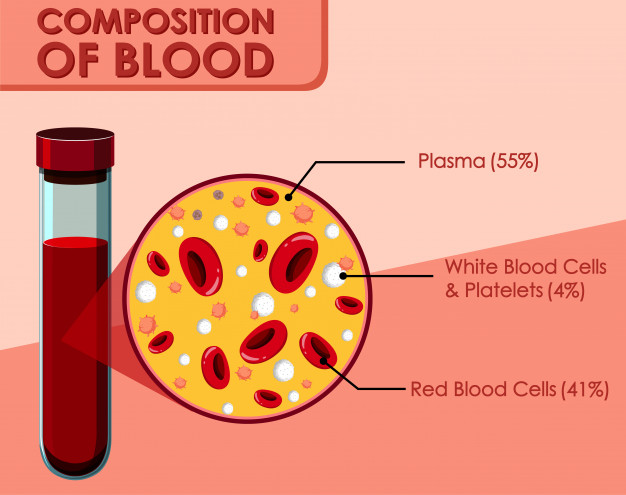 Red Blood Cells
(Risk: patient cells attacking donor blood)
O group has no blood receptors on red blood cells - if transfused it won’t be attacked by the patient’s body, hence O group is the universal donor, as it can be given to anybody. Conversely, AB is the universal recipient because it has both A and B receptors - if given to a non-AB patient, it will always be attacked by the recipient’s immune system.

Platelets
(Risk: patient cells attacking donor blood)
ABO is less important when considering platelets as these receptors are only weakly expressed. Instead these cells strongly express HLA receptors, a crucial receptor that leads to an immune response, which may or may not be shared between donor and recipient. If they are not shared, and the patient has developed antibodies against these HLA receptors, the transfused platelets will be destroyed rapidly, leaving the patient at risk of serious bleeding.

White Blood Cells
(Risk: donor blood attacking patient cells and vice versa)
White blood cells are immune cells. Their make up is also based on HLA receptors. If these receptors are not shared then the transfused white blood cells can attack the patient's cells.

In modern medicine, blood is separated into components (red blood cells, plasma, and buffy coat [platelets and white blood cells]) which makes it easier to prevent reactions during transfusion. Jasnah, to remove the poison, would need to replace all of these components of blood at once.

Blood is easier to make than other organics because it is an Essence, however, Jasnah also admitted that she is not good with Soulcasting blood which made the endeavour extremely dangerous. Replacing someone’s blood via Soulcasting seems like a difficult enough task for someone extremely skilled in this type of Soulcasting, let alone someone who has difficulty with it.

How then, does Jasnah successfully do this? To inject our regular case of spiritual mumbo jumbo, it is likely the case that she is not just Soulcasting blood, but instead Soulcasting the poison to specifically be Shallan’s blood, based on her spiritual ideal. Hence negating all of these biological problems.

This is an adequate answer that I have always disliked. But that’s just me. I am very excited to see how Brandon further explores interactions between human biology and his magic systems both in SA and also in the Silence Divine (fingers crossed that this is a story he gets to write).