The Stormlight Premium Miniatures Kickstarter is live - and already funded 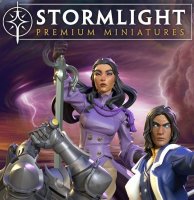 If you wanted to own figurines of Stormlight Archive's main characters, now's your chance, as Brotherwise Games began their Kickstarer for the Stormlight Premium Miniatures set of minis. If you were ever at any point concerned that the Kickstarter may fail, you may lay those worries to rest: it has been an hour and the Kickstarer has already made more than six times its projected goal of 50,000 dollars.

So, what does the Kickstarter have for us? Well, first of all are the character miniatures themselves. Those were designed in tight collaboration with Dragonsteel, and their depiction of characters is considered canon. They are sold in sets of six, and sorted by book. To wit, we have:

Unfortunately, there is no way to purchase individual figurines. If you want that one Maya on your shelf, you will have to shell out for the full Rhythm of War set - which is not to be mistaken for the Rhythm of War tier, as in the now-updated FAQ for the Kickstarter, Brotherwise explained that you will be able to choose between any of the four book sets regardless of which of the first few tiers you've selected.

If that is somehow not sufficient to you, however, Brotherwise has more to offer:

Additionally, Brotherwise is set to add more figurines as add-ons, to be revealed as the campaign continues to blow past the stretch goals. The first of these has already been revealed to be none other than the Herald of War, Taln. Before you decide to buy him, however, check your pledge level on Brandon's last Kickstarter, the one for Secret Projects, as users who pledged to it at Year of Sanderson levels will receive the Taln mini in one of the swag boxes.

Brotherwise has confirmed that they will not be releasing STL files for any of the named characters, unfortunately, out of concern for piracy. They have, however, stated that they intend to sell the miniatures later through more traditional retailers, so if you cannot afford the minis now, do not worry - you will have the chance to get them later.

If you are interested, though, it is probably the fanciest set of Stormlight collectibles out there, and if you can paint them, they will undoubtedly look stunning in your home.