The Lost Metal US Cover Revealed!

The official US cover for the fourth Wax and Wayne book is here! The US publisher, Tor, have officially released the cover for The Lost Metal, designed and created by the talented Chris McGrath. This is the second of Brandon’s big publishers to release a cover design, with the UK cover being revealed on May 18th.  As a reminder, the book releases November 15th in the UK and US (release dates in other regions and languages vary by publisher). Generally, hardcover, audiobook, and eBook are released at about the same time, and the US paperback a year later.

Links to pre-order The Lost Metal from US retailers can be found in the Tor article. 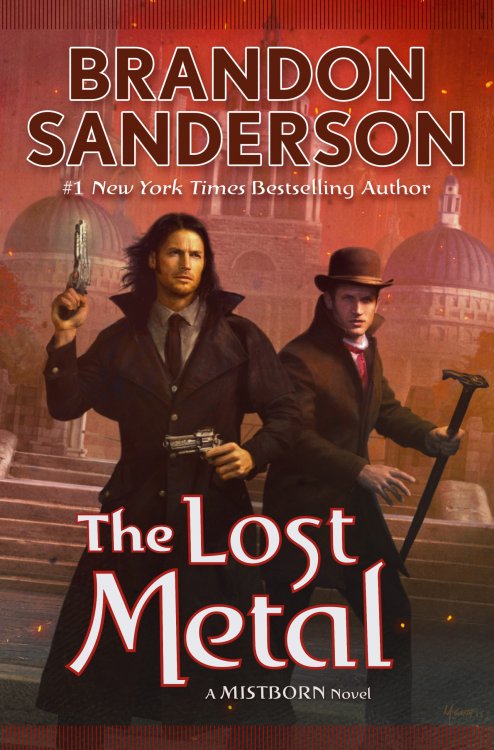 In Tor’s announcement, Chris goes into some detail about how he found Brandon’s books and it is equal parts adorable and relatable. Turns out Chris got as sucked in by Mistborn just like the rest of us.

I remember it was about fifteen years ago I came across the hardcover of the first Mistborn book while cruising the sci fi/fantasy section at Barnes and Noble. The darkly fantastic Jon Foster cover had drawn me in at the time and had piqued my curiosity about the book further, so I decided to look up the author and some reviews.  It sounded right up my alley and I had been looking for a fantasy series to read that was a bit different, so I bought the book. Just a few chapters in and I thought to myself, that I would have loved  to have done the covers for these books. As if the “fantasy gods” had heard my prayers…I was offered the chance to work on the paperback editions of the books. I was so excited and as it turns out, insanely lucky as well, to have had the chance to work on this series in Brandon’s truly epic world. Being able to do seven covers for this series has been a dream and so enjoyable. Again, I’ve been very lucky to have worked on a series of this magnitude, so I’d like to thank Brandon and everyone at Tor for this opportunity.

Looking to do a Mistborn re-read in preparation for The Lost Metal’s release? Then you should check out our new re-read podcast, Spanreads, and we can all read along together! Currently we’re working through Era 1, but will have Era 2 episodes coming out in a few months time in the run up to release of the last Mistborn book! Spanreads releases on Wednesday’s. Check out our playlist to see all the released episodes!

Are you a fan of RPG’s? Do you like Dungeons and Dragons? Big fan of Critical Role and Dimension 20? Why not check out Diceborn, our new Mistborn role playing game! Diceborn is run with the Mistborn Adventure Game rule set produced by Crafty Games, a story driven RPG set in Era 2 Mistborn which follows our five crew members, Dervish (Overlord Jebus), Royce (WeiryWriter), Hallie (Kaymyth), Marelyn (GaterGirl00), and Luca (Comatose). Diceborn releases every second Monday, alternating with Shardcast. Check out the first episode and meet all of our heroes!