Our spoiler-free Words of Radiance review 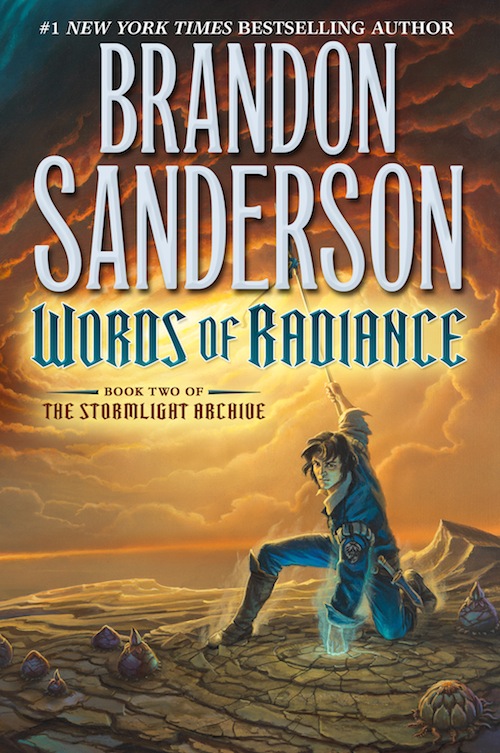 It's safe to say that Words of Radiance has the most pre-release hype of any of Brandon's solo works to-date. And it makes sense. The Way of Kings was Brandon's best work at the time, and so everyone is wondering, will Words of Radiance live up to the high bar set by book one? This is a sequel that has a ton riding on it. After all, despite the first book's length, there's still so much more of Roshar to explore. There's so many places that The Stormlight Archive can go from here, that it has been hard to predict what would happen in this book, much less a few books down the line. Words of Radiance could fall on its face. So, does it live up to the hype?

Storms yes it does.

"Of course you'd like the book," you immediately say. "You're a 17th Sharder, you'll love anything Brandon writes." I'd say this is somewhat true. None of us would be here if we didn't like what Brandon's done, but when you are a hyper fan, you set these books up to a high standard. You can see flaws that no one else sees, simply because you are so invested.

For a while, I worried that Words of Radiance would end up like The Well of Ascension, which I have some problems with to say the least. I loved Well's ending (which made it entirely worthwhile), but rereading it is a slog for me. Well of Ascension was Brandon's first true sequel, and it shows a bit. Obviously, Brandon has grown a vast deal from almost a decade ago when that book came out, but it was still a worry. Sequels are not easy, to say the least, but it looks like finishing up The Wheel of Time really honed Brandon’s sequel chops.

I also worried because--and this may sound like absolute heresy to many of you--I didn't immediately love The Way of Kings when it came out. I've come to love it after rereading it, but the first time I read it, well, while the Battle of the Tower was awesome, I had expected Part Five to be more. In all the Mistborn books the final part of the book contained even more awesomeness, but Way of Kings's final part was admittedly more of an extended prologue to the rest of the series. It took me a while to adjust to The Way of Kings and learn to love on its own merits instead of comparing it to Mistborn, which is a very different type of novel.

I say this to convince you that no, we don't believe Brandon Windruns on water. So when I say Words of Radiance is absolutely phenomenal, an amazing achievement, and my favorite Brandon book to date, I'm not being a hyperbolic fan. It really is that good. It takes everything that was great about The Way of Kings and takes it up at least five notches--maybe ten or fifteen notches, even, depending on how you measure your notches. No matter which way you slice this massive tome with a Shardblade (in which case, can I have your Blade? Actually, that might be a bad idea), Words of Radiance is incredible.

And when I say that everything is taken up a level, I'm again not being hyperbolic. Did you enjoy the interludes in book one? They are better and more plot important now. The epigraphs here are similarly more awesome and terrifying. The interior art? When you hold the book in your hands and see the gorgeous Shallan endpapers, you'll fall in love. Dan Dos Santos (artist extraordinaire, who did the beautiful US Warbreaker cover) does some art work and it is oh so excellent.

You might think that Words of Radiance, being longer than The Way of Kings, would be a chore to get through, but you couldn't be more wrong. The plotting is so much better here. You'll be amazed by how much actually happens in this book. Every part of the book is focused and tight, and it has incredible, thrilling moments all along the way.

Do you want to see more magic? Oh, we see more. Words of Radiance expands on the world and characters in such a natural way that you'll be thinking, "of course this is how it should have been. There was no other way." Brandon weaves together character development, tight plotting, and the world and magic of Roshar in a way that I can only describe as masterful.

Brandon reveals so much in Words of Radiance. Things I expected to have to wait at least two or three more books to find out are explained in full by the end of the book, which leaves me to wonder "If he’s giving us this information now, what is he holding back?"

Not only is the story great, it also has some of the most beautiful writing I've read--I teared up more than once, and that's rare for me--and it also has some of the most haunting writing I've ever read. And it manages to be hilarious, too (let me say that two characters meet in a rather unexpected way and leave it at that). It pulls at your emotions the entire way. It's relentless like that. You can tell how much he has grown as a writer in the years since he wrote The Way of Kings.

And then, that ending.

Guys, I'm not trying to deliberately hype it up for you, but you haven't seen anything yet. I had thought of giving you a summary with the spoilers heavily redacted, as in: "Then REDACTED REDACTED with REDACTED, because why not?" But I decided even that was too spoilery. All you really need to know is that there were four separate moments where I screamed "REDACT YEAH!" (insert your favorite storming swear here) in my empty apartment. Note, this was at Very Late O'Clock. So, to my poor neighbors, I would say that I'm sorry, but when you read it, you will understand the awesomeness. It was totally justified for me to scream and wake you up in the middle of the night. Pinky swear.

And when the storm passes, after you think days, weeks, and months after you finish as you try to sleep "Wow, that was incredible" (I did this five times that I'm aware of), does Words of Radiance still hold up to a less hyped up mind? It really does, and there's so much depth in the book to dissect.

There's also a deeper reason for why it has stuck with me. I love The Stormlight Archive for a lot of reasons, like its deep world and extensive magic. I'm a sucker for that, as many of you on 17th Shard are. But there's something more. As a genre, fantasy, with George R. R. Martin and others, has been trending towards darker, more "realistic" worlds. Stormlight Archive is not that.

One criticism I hear about Brandon's works is that his characters aren't gritty or real enough. Well, you know what? I like heroes being heroes. Brandon writes about heroes. When you think about it, that's what the Knights Radiant and the Stormlight Archive are all about. What does it mean to truly be a hero? Having people try and struggle to do the right thing is fascinating, and allows for opportunities where you literally scream with joy (as I did) and just stand up and cheer. I'm so glad Brandon bucks that dark fantasy trend and gives me something to love.

Words of Radiance is truly an achievement. It expands on its predecessor, fulfilling the promises it sets up, and manages to surpass it. There is no question about it: this is my favorite Brandon Sanderson novel. When I read The Way of Kings, I had thought that while it was (at the time) Brandon's best written novel, it wasn't my favorite, but that The Stormlight Archive series absolutely had the potential to be Brandon's best series. Well, that was entirely right. There's no doubt about it. Out of five stars, this book is ten heartbeats, with a 2:1 stars to heartbeats ratio.

If you adored The Way of Kings, you will be blown away by Words of Radiance. Even if book one didn't thrill you, however, I can't see how you won't be enthralled by this volume. It really is that good. You'll be sold on the entire series with this.

Fire and hammer forge a sword; time and neglect rust it away. And the same is true for The Stormlight Archive. Yes, we have seen the time and maybe even felt some neglect, but what Brandon was out of sight doing tempered his skill as a writer, and this book is the reward. The Knights Radiant will stand again, and this book is proof that they will stand for a long time.

Thanks to Josh for his contribution to this review.