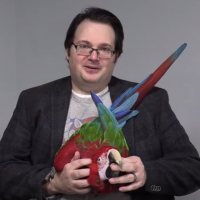 Brandon is continuing to give us virtual company with his series of live signing sessions. This time around, signatures (the bookbinding kind, as Brandon likes to point out) for the Elantris leatherbounds were up for signing. If you haven't been keeping track of the last few livestreams, this means that the Dragonsteel editions of both Elantris and Mistborn will come back in stock sooner rather than later!

As has become usual for these streams, Brandon also answered questions and opened some fan mail, such as an awesome handmade slipcase for the Reckoners books. But besides his macaw Magellan, whom we've seen use the Force before, another special guest joined Brandon this time around. If you ever were wondering where Brandon got his storytelling chops from, look no further than his dad! Grandpa Sanderson treated us with stories from Brandon's childhood, giving us glimpses of how mischievous of a child Brandon could be and how proud he is of his son.

One of these stories even led to a Cosmere tidbit which we've known before but have never heard the real world inspiration of: The topaz, the origin of one of Hoid's earliest aliases in Dragonsteel and the gemstone referenced in the Letter, apparently is taken directly from a ring that Brandon's dad - a hobbyist jeweler himself - bought him in Jackson Hole.

Among all the stories, Brandon also lauded his dad's baking skills. Magellan gets to enjoy homemade bread and Brandon loves what they've dubbed "Cosmere cookies", a variation on butterscotch cookies the exact recipe for which is secret but Adam might send it to you if you ask him nicely. Of course Mr Sanderson also had a story to accompany it.

While the visit from Brandon's dad was certainly a highlight of the stream, there were a few other interesting things that he talked about. For those looking forward to the Way of Kings Kickstarter this summer and who have been shocked to hear that the poster they recently revealed would come folded rather than rolled up in a tube, rest assured that Dragonsteel is aware of the issues - such as putting a crease right across Kaladins face - and they are looking into alternative ways to ship the poster. It might be relegated to an add-on to the campaign, since the logistics involved with not folding them are complicated.

Right before the end of the stream, Brandon showed off a great foam Sylspear crafted by the folks at Forged Foam. Dragonsteel is currently looking into ways of licensing the company to produce foam Shardblades, so hopefully we can look forward to turning into a Radiant with official merch eventually!

If you're excited to hear some of the stories Brandon's father shared with us (and they're definitely worth it!) you can watch a recording of the stream below. You'll have the opportunity to tune into another livestream next Thursday (May 14), for which Brandon will most likely be joined by his mother! We're already looking forward to the stories she has to tell.