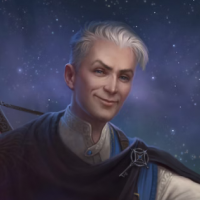 Brandon had some important news to share with us today, as he alluded to in yesterday's Weekly Update. If you haven't seen the news directly from him, we encourage you to watch this video first, and then we'll break it down:


Did you watch it?

No really, did you?


I'm guessing your face looked something like this too?

So... Sanderson started to feel a bit bogged down, overbooked, and overwhelmed in 2019, mostly on account of the amount of traveling he was doing. When Covid forced Brandon to skip the traveling in 2020, all of that freed up time created an opening for unscheduled writing. And he seems to have loved it! He wrote a book in secret that year, and as the reduced traveling continued in 2021 he wrote four more. One is a middle-grade story that will probably be a graphic novel (but it's still a bit of a work in progress). The other four of them are full-length, adult sci-fi/fantasy novels with three of them being Cosmere books. And here they are, with tentative covers and titles hidden: 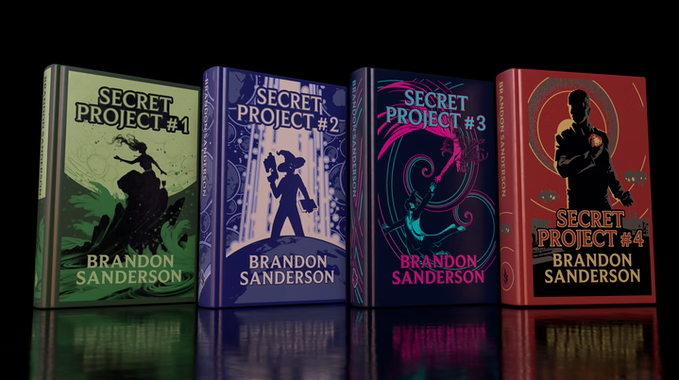 Sanderson also announced a Kickstarter campaign that is open NOW. This will essentially be a monthly subscription box program for 2023, including one of the four books every three months and swag boxes on the months in-between. The different tiers give you some options on what formats you'd like the books in and whether or not you want to pay for the swag boxes or just stick to the books. The themed swag boxes will contain one featured item and two supporting items. It sounds like t-shirts are likely to be included, though we don't have any other details on what they might contain at this time. They currently have no plans for stretch goals. In any case, here's the schedule for this "Year of Sanderson": 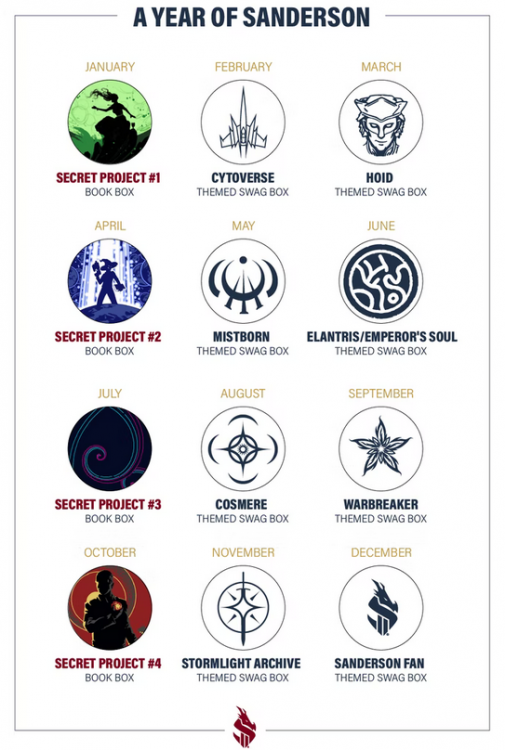 Please note that these books WILL ultimately be available for those who did not participate in the Kickstarter! So if it's not something you can afford at this time, or if you've missed the Kickstarter altogether (and somehow found your way here), you will certainly have a chance to get your hands on them. The ebooks and audiobooks should be released shortly after the Kickstarter deliveries, and print editions will eventually be available as well!

So what do we know about the books so far? Brandon had a few things to say during his video, mentioned a few more on the Kickstarter page, and just finished a surprise livestream in which they gave us some more crumbs. Here's what we know:

That's all we know so far, but there's more to come! Starting on Thursday, Brandon will be posting weekly readings from each book. It sounds like we can expect the first 5-6 chapters of Secret Project #1 on this Thursday, with readings from the others coming on subsequent Thursdays. Brandon will also be doing weekly livestreams on Tuesdays for the duration of the campaign (which is for the next 30 days). The first segment of these livestreams will be no spoilers, but the second half will get into some more details about the books and for questions that address the readings released on Thursdays. So stay tuned!

WOW! It's a lot to take in. What do you guys think? Let us know what your reaction was in the comments! And if you've got any theories for what these books might be about, we'd love to hear them!