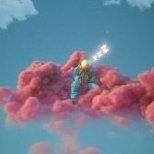 Nightblood is made from atium