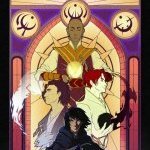 What was in the Terris Dominance? (Discuss)