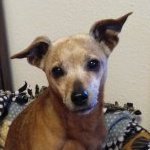 How could Notum's father be a deadeye?