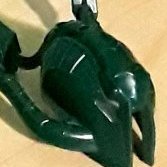 So in my reread of the SA, I noticed how much the Stormfather didn't want to bond to anybody. He definitely thought that breaking the oaths would kill him.

Something else I remember reading is that there was only one bondsmith when the recreance happened.

So my question is, do we know what happened to that spren? Was it killed with most of the other spren, or did it somehow survive? Did the bondsmith at the time hold to the oaths when nobody around them would?