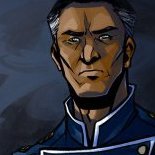 [OB] The secret that caused the Recreance