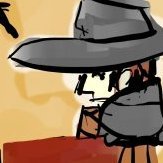 To Hunt the Ones Above [HOA]