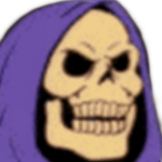 What are the Men of Gold and Red?