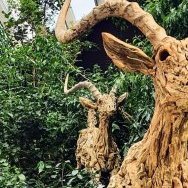 Hello, can someone explain why only Shallan and Renarin out of all radiants could sense Re-Shepir's presence at the Urithiru tower?