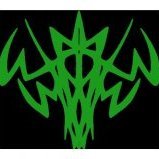 Explain the Children of the Light to me

Started by Gray to, May 6