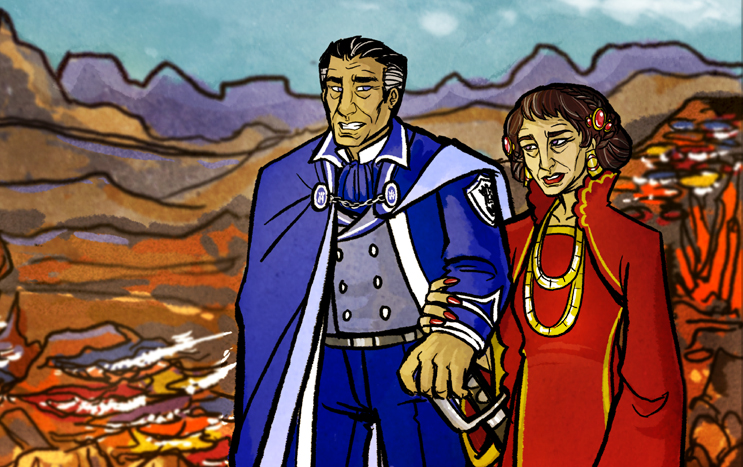 An illustrated scene in the style of an animated series. This is not one of the most action-y scenes, but I thought it was a touching moment of honesty and intimacy between Dalinar and Navani, when he got over avoiding her at every dinner party. It felt like an insight into the old Dalinar, and I think all of us are getting hyped for SA3. It was one or two particular paragraphs that made me go "what the chull am I reading here???", which inspired this drawing and the characters' funny expressions. And also I just wanted to try my hand at drawing weird Rosharan vegetation. There are some rockbuds and my attempt at shalebark.

“I didn’t mean to confuse you, all those years ago,” he said, voice soft to keep it from prying ears. “I had intended to court you, but Gavilar expressed a preference for you. So I eventually felt I had to step aside.”

“He didn’t realize that I was interested. He thought that by introducing you to him, I was indicating that he should court you. That was often how our relationship worked; I would discover people Gavilar should know, then bring them to him. I didn’t realize until too late what I had done in giving you to him.”

“‘Giving’ me? Is there a slave’s brand on my forehead of which I’ve been unaware?”