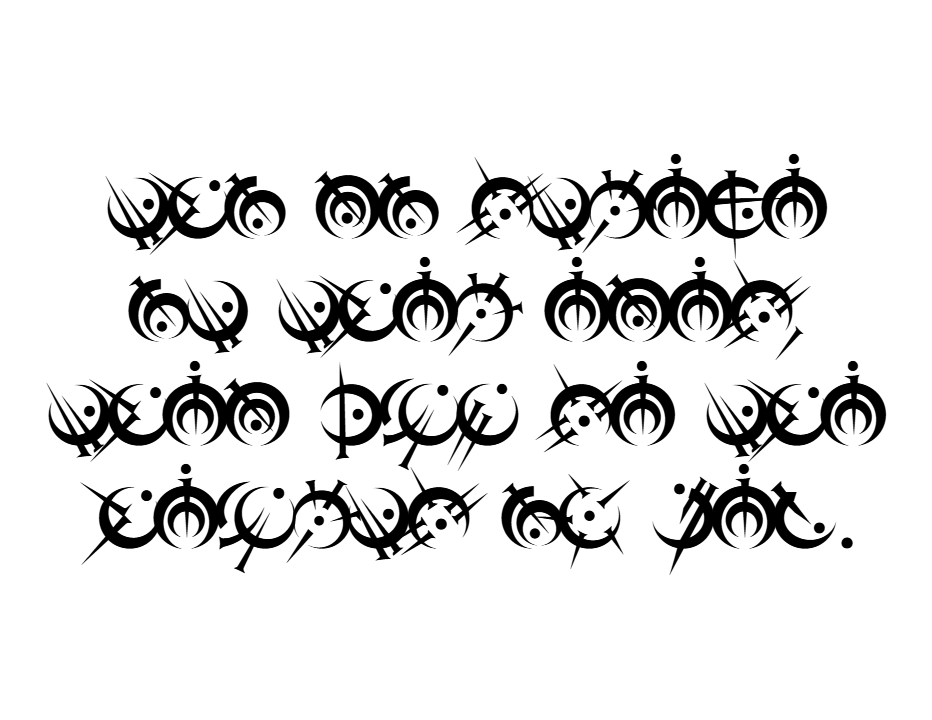 They Shall See the Hearts of Men (Steel Alphabet Font) 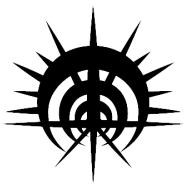 This image is the quote "Though You Strike Out Their Eyes, They Shall See the Hearts of Men" created using the above font, which is a version of the Steel Alphabet of Scadrial (The quote is from artwork by Ben McSweeney). The script is in a style used by the Canton of Inquisition during the Final Empire (though this particular writing style may not be strictly cosmere-canon, as it comes from the Mistborn Adventure Game). A wealth of information on the Steel Alphabet can be found at the Coppermind here.

I was inspired to make this font after first encountering this fabulous font created by 17thShard user Claincy. If you prefer their font, then by all means use it! It is very similar to mine.

So why did I make this font? Well, BenMcSweeney (Inkthinker) created this fantastic piece of artwork for the Mistborn Adventure Game, and as you can see, the script runs together much more closely than in Claincy's font (you can see the translation decoded by user Valkynphyre in this post). The overall feel is that of an illustrated manuscript that's probably been around for quite some time, which is the main reason I suspect the style to be archaic as of the events of Mistborn. Anyway, consider my font just a stylistic variant - "Inquisition" style as opposed to the "Final Empire" style of Claincy's.

Note: internally, my font is named "SteelAlphabet" with the "Inquisition" font style sublabel. Claincy's font shares the same name but has the "Aligned" font style sublabel. When both fonts are installed, they will be categorized as different styles of the same font (the same way bold or italics work). In a document editor like MS Word or LibreOffice Writer, only one entry for "SteelAlphabet" shows up in the list of fonts, and "Inquisition" or "Aligned" can then be selected for the font style. The font style selection is normally accessed in a popout window. In Word, this is the advanced font options menu available at the bottom right of the "Font" section of the top toolbar (or with the hotkey Ctrl+D). In Writer, this is accessed by opening the "Format" drop-down menu from the top toolbar, then selecting "Character."

The basic letter assignments are those shown on the Coppermind page linked above, with the following modifications.

In the process of transliterating the text of McSweeney's Inquisitor artwork, I noticed the following spelling rules, which are automatically applied by the font:
-O and U are undifferentiated; both are Pewter
-E and I are undifferentiated; both are Tin
-Doubled letters are reduced to a single glyph (both consonants and vowels)
-EI and IE are replaced by one Tin glyph (counts as double letter)
-OU and OUGH (silent GH) are replaced by one Pewter glyph (counts as double letter)
-The name of a metal is replaced by its glyph (preferably an illustrated drop-capital, but I
don't have the artistic skill to create these, sadly)
-Hard C is replaced by K
-Soft C is replaced by S (the one instance of C/CH for soft C is probably a typo)
-Hard CH is replaced by K, but soft CH is a distinct glyph
-SH is a usually a distinct glyph (the one instance of SH as two glyphs is probably a typo)
-PH is replaced by F

The mapping of the Steel Alphabet symbols to Latin was decoded by 17thShard user Valkynphyre. The 24 basic symbols were downloaded from the Coppermind wiki in SVG format - these SVGs were created by user Paleo. In Ben McSweeney's Inquisitor artwork, a period and a comma appear. These were recreated by me, and used as inspiration for the rest of the punctuation included in this font. Additionally, the Kredik Shaw symbol was recreated by me from its appearance in McSweeney's Inquisitor piece. The kerning values in the font are designed to mimic those in that same artwork.

Note than in McSweeney's artwork, the line spacing is deliberately extra narrow, such that the descenders of one line overlap with the ascenders of the line below it. This font is set up so that the glyphs extend slightly above and below the defined max and min height, in order to replicate this behavior. However, in MS Word, line spacing of "single" will automatically adjust to avoid this overlap. Setting line spacing to "exact" instead will replicate the overlap behavior - BUT Word will NOT display it! The overlap will show up when saved as a PDF or printed, but the onscreen display cuts off the overlapping portion of the letters. Other programs, such as LibreOffice Writer, should display the overlap correctly onscreen using the default single line spacing.

Another small note about the artwork - the quote used for this gallery image is actually the one place in the artwork that "SH" (in "shall') is spelled with "S" and "H" instead of the special "SH" symbol. I think it's a typo? Anyway, the image I have created uses the "SH" symbol instead, so it does not exactly match McSweeney's text.

If you want to play around with the font in FontForge, here is the SFD file: