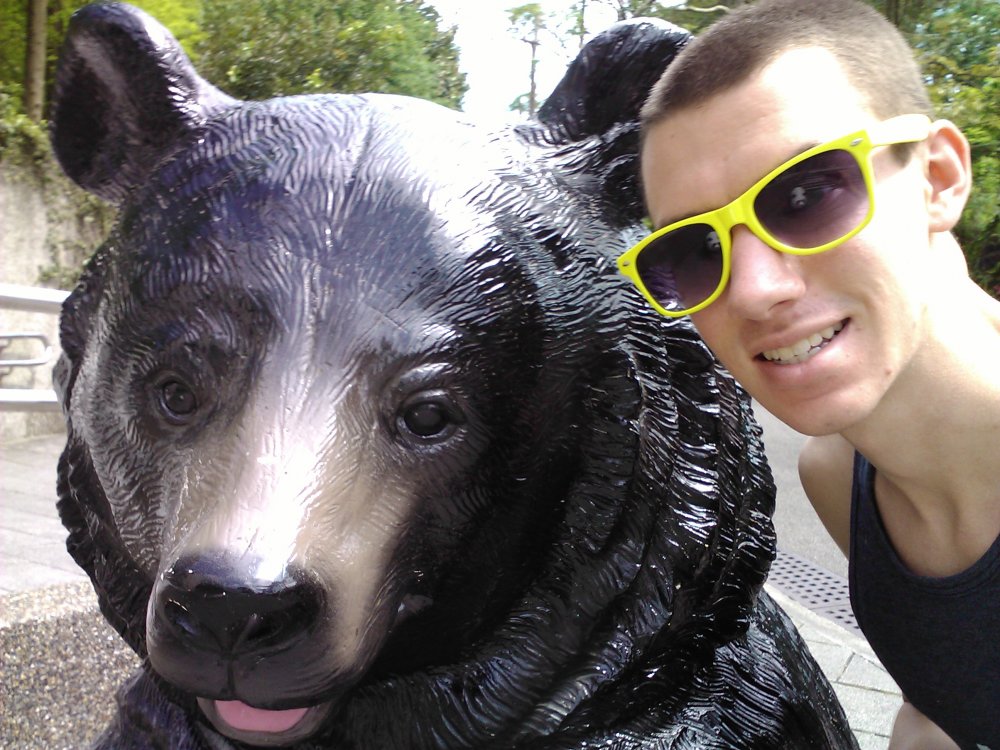 Hey all, long time no blog!

So, I guess I'll get everyone caught up with everything that has happened since my last update. There's a lot, so sit tight, and I'll try not to go on about any one thing.

Jezreel told me that, when people from Taiwan return home from traveling, people here ask about what they ate, rather than what they saw and did. I'm quickly finding this part of Taiwanese culture slipping into how I view my trip, as so much of what we do centers around eating, eating, and more eating!!

For clarity's sake, I'll divide the post up into days again, just to keep everything straight.

From Zony's house, Jezreel and I went back to Tainan, and met up with his uncle and cousin, Vivi, for supper. We went to this really well established restaurant (apparently it's been around for more than forty years), and had some delicious traditional Taiwanese food, including some dumplings, these beef and leek cake things, and some good old wonton soup. I did all right eating the whole meal with chop sticks, but I did make quite the mess. After dinner, we hung out a bit, and Jezreel's uncle bought me some plum spice and dried cherries from this dried goods store (he was a very nice man). After that we took a train and a cab back to Zony's house. Jezreel and Zony decided to head out to Kaohsiung for another night out at the club, but I decided to stay in and get some rest.

While I was resting, Zony's sister came home, and startled me awake, thinking I was Zony. She goes to university in Kaohsiung, and didn't know Zony had friends over. Luckily, she spoke pretty good English, so I was able to explain the situation and go back to sleep.

On Sunday, Jezreel and I packed our bags and caught a cab to the train station, and our back packs on we headed out to Kaohsiung.

At Kaohsiung, we started out exploring the cool train station there, including the "Dome of Light," which is a really cool stained glass dome. Then, we headed out to the Kaohsiung night market, which is right by the train station, and got something to eat (pig kidney soup, if I remember correctly, and fresh dragon fruit for dessert). Then, we took a train to the coastal area of the city, and went exploring. Kaohsiung is the second largest city in Taiwan, and is the largest city in the southern half of the island, and is known for it's art scene. We spent a lot of time walking around the ocean and the river, and checked out a photography gallery, and listened to some live music that people were playing.

On our walk, we circled back to another train station, and after catching a metro to the main station, we caught another High Speed Train to Taichung, where Jezreel grew up and his grandparents live. We were both pretty tired at this point from all of that walking (and my back-pack was pretty heavy at this point, haha), so by the time we got to Jezreel's grandparents house, we went to bed pretty quickly.

We both slept in a bit, and woke up for lunch that Jezreel's grandmother had prepared. Just in case there is any doubt (I didn't have any) a grandma's home cooked meal in Taiwan is every bit as satisfying (and filling!) as one in Canada. Monday, we mostly just hung out at the house, until we took the family scooter to the Taichung night market after supper (both lunch and supper consisted of rice, a green vegetable dish, a stir fry with chicken, salmon, a soup, a meat dish (duck and beef, respectively, if my memory serves me), and fresh fruit (watermelon!) for dessert.

The night market in Taichung was really cool. Jezreel took me to a really well known shaved ice place for some delicious shaved ice with beans and ice cream (delicious!) and then we arrived home for bed.

Tuesday, I woke up for breakfast, and was treated by Jezreel's grandmother to a salty fried cake thing, two sweet cakes, one with honey and one with chocolate in the middle, and an apple (which I ate the core of). For lunch, it was another set of delicious dishes to be eaten with rice, including some delicious beef, and more amazing salmon. For dessert after lunch, Jezreel and I got fresh watermelon and pineapple.

After lunch, Jezreel took me out on the scooter, and went across the city to show me where he used to live as a child, after his grandparents moved in to his family's old house. Then we met up with one of Jezreel's elementary school friends who now owns a Taiwanese burger (consisting of fried meat, peanut sauce, veggies, and a little bit of sugar: totally delicious) booth, and tried some of his wares (despite being still full from a day and a half of grandma meals). Then, we quickly checked out an art museum before it closed (only the first floor), and then walked around in the park outside the science museum, and checked out Jezreel's old elementary school.

We also checked out a mall, where I found Chinese copies of a bunch of Brandon Sanderson books (Mistborn 1-3, Elantris, Way of Kings), and got Jezreel to take pictures of them (he convinced me not to buy them, since I already have English copies that I have read, I cannot read Chinese, and I didn't have much room in my already heavy back pack). They were soo pretty though (pictures will be coming, haha)! I did buy two English books there, since I'm running out of reading material, and the train ride home from Vancouver is going to be long!

Finally, it was time to head back, just in time for another home cooked meal. This time the meat dish was Taiwanese sausage (best eaten with onion).

After supper, we packed our bags, caught a city bus to the bus depot, and bussed all the way back to Taipei, where we promptly fell asleep.

And that brings us up to today. Today was Jezreel's first day back at work since I arrived here, so I found myself on my own for the first time since my arrival. After Jezreel left, I went for a run around Da'an park. Then, after showering and dressing (and chatting on Facebook a bit, since morning here is evening at home, and thus optimum time for chats), I changed more money to Taiwanese dollars (by myself), ordered some Subway to go, and caught the metro rail to the Taipei Zoo.

It was a gorgeous day outside when I left, so of course I wore my new shorts (purchased at the Tainan night market), and a sleeveless shirt, meaning I was totally unprepared when, just as I had reached the far end of the zoo, it started raining! At first it was just a light drizzle, but then I heard thunder in the distance, and decided that I had better start heading back to the entrance (it was about time to head home anyways). After toting an umbrella along through all the rainless days Jezreel and I were travelling, the first day I didn't have it with me was, of course, the day it rained.

I managed to get back to metro safely, where I (all by myself) refilled my Easy Card with dollars, and took the train back to the Da'an area, where Jezreel lives, and was happy to find it was not raining there.

Oh yeah, animals. The Zoo had a lot of really cool exhibits. I saw some pandas, a tiger, a lion, some hippos, some elephants (Asian and African), some camels (one humped and two), a crocodile, an ant eater, some penguins, some zebras, some gazelle, a bunch of reptiles, flamingos, and many others. They pretty much had everything you could expect (it's a pretty big, and might I say gorgeous, Zoo), even a Beaver. Unfortunately, it started raining right when I was nearing the beaver exhibit, so, since we have those at home, I decided I'd rather get back to the entrance before the rain got worse.

So anyways, that's my trip since my last update. I should be in Taipei, with regular internet access for the next while, which means I'll probably be updating a little more regularly. I hope you all liked the update